The suspects were arrested for allegedly killing a man in Ogwashi Uku. 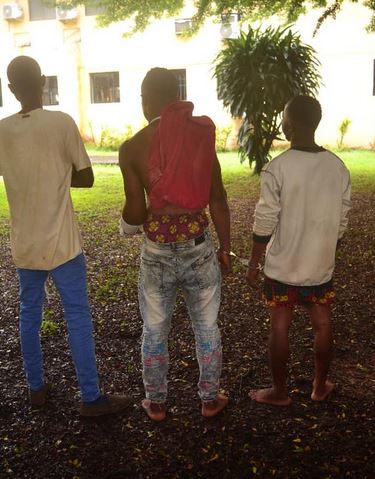 Twelve suspected cultists linked to the murder of one Ifeanyi Umeadi in Ogwashi-Uku have been arrested by the  Delta State Police Command.

Parading the suspects at the police headquarters in Asaba on Tuesday, August 17, the State Commissioner of Police, Mohammed Ari Ali, identified three of them as Chiedu Ewuzie, Bright Ushiagwu and Nnamdi Okocha.

"On the 14/8/2021 at about 2045hrs, a combined team comprising of all tactical squads, Ogwashi-uku patrol teams and vigilante raided Agidiese Qtrs where twelve suspected cultists were arrested. Among those arrested are Chiedu Ewuzie 'm', Bright Ushiagwu ‘m’ AKA Small, and Nnamdi Okocha ‘m’ a dreaded arrow barger cult group," the CP stated.

"They have been on the run after they allegedly murdered one Ifeanyi Umeadi sometime in the month of July 2021 at Ogbeofu qtrs in Ogwashi Uku. Nine of the suspected cultists have been charged to court, while the other three murder suspects are still undergoing investigation." he added.