To avert the imminent collapse of the war-torn country with 39 million people and promote peace and stability, Olusegun Obasanjo had travelled to Kabul and met with some leaders of the country. 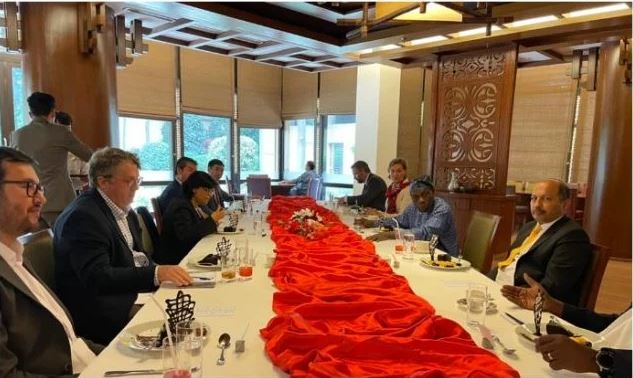 Obasanjo (second right) with others at a peace meeting in Afghanistan on July 5, 2021. Photo: @ambmansoorkhan/Twitter

Days ago, on Sunday, the Islamic militant group known as the Taliban retook Kabul, Afghanistan’s capital city, but the fall of the landlocked Asian country had been seen by many observers when US President Joe Biden started the withdrawal of American forces from Afghanistan beginning in early July.

To avert the imminent collapse of the war-torn country with 39 million people and promote peace and stability, ex-Nigerian President, Olusegun Obasanjo, had in July travelled to Kabul and met with some leaders of the country as well as envoys of neighbouring countries.

Obasanjo, unarguably one of the prestigious global citizens from Africa, had met with the Ambassador of Pakistan to Afghanistan, Mansoor Ahmad Khan, members of the Aga Khan Development Network, as well as other diplomatic representatives. AKDN is an international organisation which “brings together a number of development agencies, institutions, and programmes that work primarily in the poorest parts of Asia and Africa”.

Announcing Obasanjo’s presence at the meeting in Kabul on July 5, Khan had in a tweet captioned a photo, “Today, frank discussions at lunch with former President of Nigeria, Excellency Olusegun Obasanjo, hosted by AKDN Ambassador, (Hijri) Sheherzade, about promoting long term peace, stability, reconciliation and development in Afghanistan.”

Obasanjo, Nigeria’s democratically elected President between 1999 and 2007, had been instrumental to the restoration of peace in many parts of Africa including Liberia, Sudan, Ethiopia, amongst others.

The former Nigerian military head of state between July 1975 and February 1976 had sat on many peace committees including those of the United Nations, African Union and Economic Community of West African States.

Speaking of Obasanjo’s “peace wand”, embattled National Chairman of the Peoples Democratic Party, Uche Secondus, on Thursday, described the ex-President as a “global personality, resolving issues across the world. In fact, the last place I learnt Baba visited was Afghanistan; despite the situation in that country, he went there and came back alive.”

Secondus ran to Obasanjo in his Abeokuta home on Thursday to save him from his many troubles within the party.

Though it appeared the octogenarian was unable to pull his “peace wand” in Afghanistan, only time would tell whether Obasanjo’s “peace touch” would work for Secondus whom some party chieftains want out as chairman.