She was sworn in at the stroke of midnight Tuesday, taking control of a state government following Cuomo's resignation. 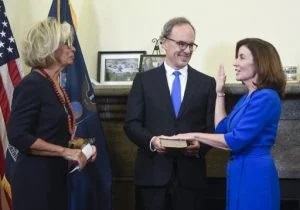 Hochul sworn in
The first woman to ever become the governor of New York, Kathy Hochul has been sworn in.
She was sworn in at the stroke of midnight Tuesday, taking control of a state government desperate to get back to business after months of distractions over sexual harassment allegations against Andrew Cuomo.
The ABC 7 reports that the Democrat from western New York was sworn in as governor in a brief, private ceremony in the New York State Capitol overseen by the state’s chief judge, Janet DiFiore.
The new governor tweeted immediately after:
Honored to be officially sworn in as New York’s 57th Governor.
Looking forward to the full swearing-in ceremony with my family later this morning, and addressing the people of New York later today. pic.twitter.com/RUsDtzoW7r
— Kathy Hochul (@GovKathyHochul) August 24, 2021
Hochul’s ascent to the top job was a history-making moment in a capital where women have only recently begun chipping away at a notoriously male-dominated political culture.
New York Attorney General Letitia James congratulated Hochul via Twitter just moments after the swear-in ceremony.
Today is a historic day for New Yorkers with the swearing in of our first female governor, @KathyHochul.
I congratulate Governor Hochul on this incredible accomplishment and wish her well in her new role building on the progress of our great state.
— NY AG James (@NewYorkStateAG) August 24, 2021
Cuomo left office at 12:00 a.m, two weeks after he announced he would resign rather than face a likely impeachment battle. He submitted his resignation letter late Monday to the leaders of the state Assembly and Senate.
In the letter addressed to Senate Majority Leader Andrea Stewart-Cousins and Speaker of the New York State Assembly Carl Heastie, Cuomo wrote:
I hereby tender my resignation for the office of Governor of the State of New York. This resignation will be effective at 12:00 a.m., August 24, 2021. It has been my pleasure to serve with you both.
Top Stories