BBNaija: How Jackie B And Jaypaul Emerge Heads Of House


The duo became head of house after fininshing the HoH challenge in the shortest time. 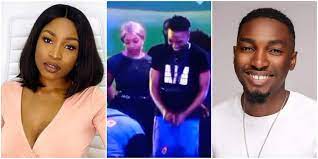 Jackie B and Jaypaul
This week, two housemates have emerged as heads of house.
Big Brother Naija Shine Ya Eye housemates, Jaypaul and Jackie B will lead the house after Biggie introduced a twist.
This comes after the duo finished the HoH challenge in the shortest time.
For the special Head of House challenge tonight, the housemates were given 2 minutes,30 seconds to complete the different stages of the challenge.
According to the twist earlier introduced for the week, the male and female housemates who finish the challenge at the shortest time would become the Heads of House.
While Jackie B ended her game at 1:09, Jaypaul finished at 1:12. With their speed, they emerged as the HoH for the week.
As part of the twist, the other 15 housemates are up for possible eviction this week and need the votes of fans to keep them in the house.
Big Brother also changed the challenge to include more twists rather than the usual die game.
The challenge was divided into various parts which include eating eggs, drinking concoctions and going through slippery passages to find keys.
Liquorose, as the last Head of House, becomes the first nominated housemate this week as she is not liable to play the game.
Pere was also barred from playing the HoH game due to the strike he had last week for microphone infringement.
With Jackie’s and Jaypaul’s win, the duo will share the exclusive HoH lounge this week.
Top Stories