The lady said she fell to the ground as a result of the fracas and the driver hacked her hand and drove off. 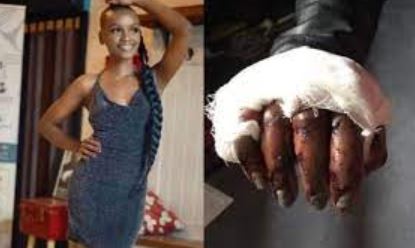 A female passenger has accused a driver with the popular ride-hailing app, Bolt Kenya of attacking her.

The incident happened on Sunday, August 29 around 9:00pm near Diamond Plaza, Nairobi.

According to the complainant identified as Suzzy Cerra on Instagram, fracas started when the Taxi driver, identified as Samuel, demanded to charge them almost three times the value charged by Bolt.

Suzzy, who was in the company of her brother, claims the driver insisted on the amount and when she opted for cancelling the trip, he became bitter and assaulted her brother with a wooden throwing club (rungu).

According to Suzzy, he further brandished a knife and aimed it at cutting the brother’s head forcing her to come to his aid by blocking the knife with her hand.

She says they both fell to the ground as a result of the fracas and it is at that point that the driver hacked her hand and drove off.

“The driver said he will only carry us if we pay Ksh780 yet the app was reading Ksh270.

That is when he became furious and assaulted by brother with a baton. He then brandished a knife and wanted to cut my brother’s head but I blocked it with my hand and we all fell to the ground. It is there that he hacked my hand and drove off),” Suzzy narrated.

According to images seen by K24 Digital, Suzzy’s wrist and fingers are visibly swollen with a white bandage covering her knuckle and palm.

In response to allegations, Bolt Kenya released a statement urging the victim to report the incident to Parklands Police Station so that justice can be pursued.

The cab company confirmed that Suzzy requested a trip, the same driver accepted and confirmed at 8:41pm on the said date.

According to Bolt Kenya, the driver after the incident proceeded to Parklands Police Station where he reported that he was attacked by a group of 8 people who were forcing their way into his car whose maximum capacity is 4 passengers.

The driver admitted to equally attacking them but claimed he acted in self-defence.

The taxi company pledges justice for the victim if she follows due process of the law.