The Governor made this known while fielding questions from correspondents after a visit to President Buhari at the presidential villa, Abuja on Monday, September 6. 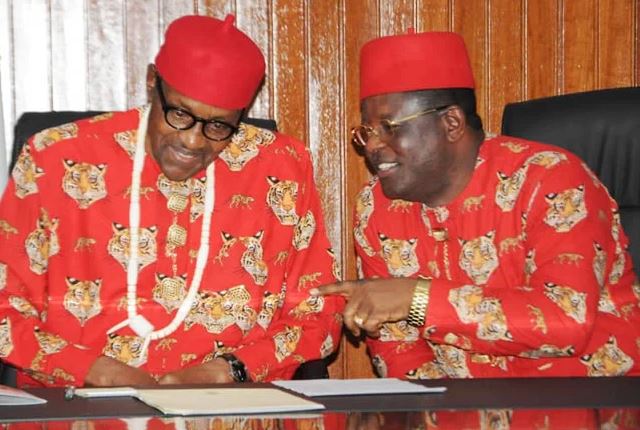 Governor David Umahi of Ebonyi state has prayed for God to make the Next President have a good heart like President Muhammadu Buhari.

The Governor made this known while fielding questions from correspondents after a visit to President Buhari at the presidential villa, Abuja on Monday, September 6.

Umahi also noted that members of different political parties from the South-East are working within their parties to ensure that they concede their presidential tickets to the region.

Asked whether South-East leaders were working to get the main political parties to zone the presidency to the region, he said:

“Well, for me, I’m very much entrenched in completing my projects. And I will look into politics when my tenure is remaining one year, which is from May 29 2022. And I think it is the same thing with other governors of South-East and by extension, governors of APC.

Speaking further, he said; "My position about what you ask is that our people that are in those political parties are making efforts in selling the need for South-East to produce the next president

"But I think both the governors and Mr. President should not be distracted. When the elections are done and won, it should be governance. But in this country, the moment the election is completed, the next one that starts is that the masses are being cheated

"So, those whose job is politics and who are not into elected position, or appointed position have all the time and the opportunity to do this canvassing. And I think that they are doing it and doing it very well

"But I continue to say that power rests in the hands of God. And God will also give us the next president who has good heart like President Buhari for the good of this country. We need God’s own anointing for our own anointed president, for the interests and unity of this country.” he concluded.