The defendants allegedly floated an unregistered Non-Governmental Organization through which they solicited funds from the public to assist persons suffering from cancer but diverted the proceeds to their personal use. 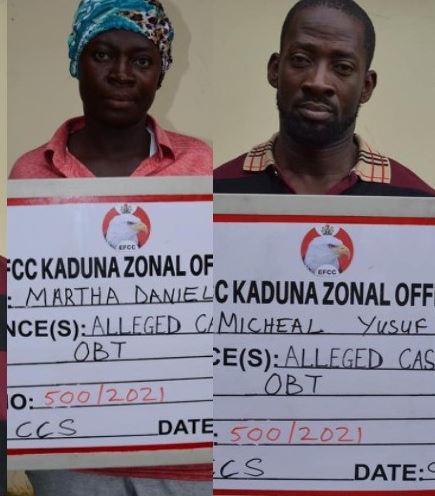 Two siblings, Michael Yusuf Michael and Martha Daniel Yusuf have been arraigned by The Kaduna Zonal Command of the Economic and Financial Crimes Commission, EFCC, before Justice Hannnatu A.L Balogun on an eight-count charge bordering on obtaining by false pretence.

The defendants allegedly floated an unregistered medical and empowerment Non-Governmental Organization (NGO) through which they solicited for donations from members of the public on social media, ostensibly to assist persons suffering from cancer but diverted the proceeds to their personal use.

Investigation reveals that Michael who poses as the founder/CEO of the NGO, opened a Facebook page with profile name: MYM123 Care, with contact phone No: 080133715151, email address: [email protected] .

On the 22nd March, 2021 he posted a video of a woman suffering from breast cancer and sought donations for her medical treatment from kind-hearted persons through one of their bank accounts with the account name, MYM123care.

Contributions into the account either through bank transfers or cash lodgments ran into millions of Naira. The defendants instead of using the money to assist the cancer patient, allegedly diverted the funds.

One of the charges reads, “that you Michael Yusuf Michael, Martha Daniel Yusuf, Ali Felix (at large), Samuel Kabir Daniel ( at large), KITE ICT HUB LIMITED and Femi Obasaju ( at large) sometime between the months of March and July, 2021 in Kaduna within the jurisdiction of this Honourable Court, with intent to defraud conspired amongst yourselves to obtain a total sum of N 55,879,379.76 ( Fifty -Five Million, Eight Hundred and Seventy Nine Thousand, Three Hundred and Seventy Naira, Seventy- Six Kobo Only) from the general public under the pretense that it was only to be used for the treatment of ailing persons and cancer patients, which pretense you knew to be false and thereby committed an offence contrary to Section 8 (a) of the Advance Fee Fraud and Other Fraud Related Offences Act 2006 and punishable under Section 1 (3) of the same Act”.

The defendants pleaded not guilty to charges brought against them. Consequently, the Prosecution Counsel M.E Eimonye urged the court to fix a date for trial to commence. But the defence counsel, Frank Ateregeme urged the court to admit his clients to bail.

Justice Balogun however refused the 1st defendant (Micheal) bail on the grounds that he had not placed sufficient materials before the court to guarantee that he will not jump bail or tamper with the evidence and witnesses in the case, as several of his accomplices are still at large.

The Court ordered him remanded in the custody of Nigerian Correctional Service, Kaduna, while the 2nd defendant, Martha, who is pregnant, was released to a surety.