BBNaija: Team Bitcoin Wins $5000 Worth Of Bitcoin In Patricia Task


Members of Team Bitcoin include Liquorose, Cross, Saskay, Queen, and Emmanuel and they won $5000 worth of bitcoin as their prize, as announced after their performance. 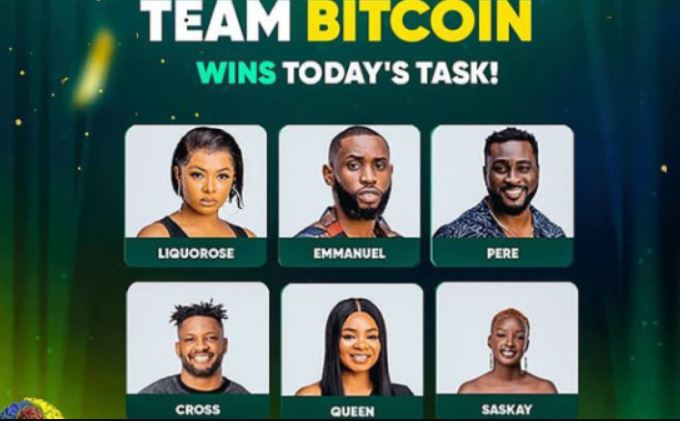 Recently, the Big Brother Naija Shine Ya Eye housemates participated in a challenge organised by Patricia and Team Bitcoin emerged victorious in the task.

Members of Team Bitcoin include Liquorose, Cross, Saskay, Queen, and Emmanuel and they won $5000 worth of bitcoin as their prize, as announced after their performance.

In addition, Pere, who acted as the umpire for the games would join the winning team in sharing their price.

Patricia task which took place on Saturday, day 56 of the show, involved several activities and the housemates were divided into two teams: Team Bitcoin and Team Ethereum.

In the earlier part of the task, the housemates participated in an individual runway pageantry session.

During the pageant, each housemate also gave a presentation about their outfits.

For the first group task, each team were asked to create a drama to depict the uses of Hank, one of Patricia’s product.

The second task was a crypto-related charade game, supervised by the umpire, Pere.

Dart games formed the third part of the task, where all team members took a shot to hit the bulls eye.

Crossword puzzles were the last and final round of the task as team members tried to form words.

According to the announcement, Team Bitcoin emerged victorious as they had 70 points as their overall score.