A popular American musician has been ordered to pay a staggering $1.5M to his estranged wife. 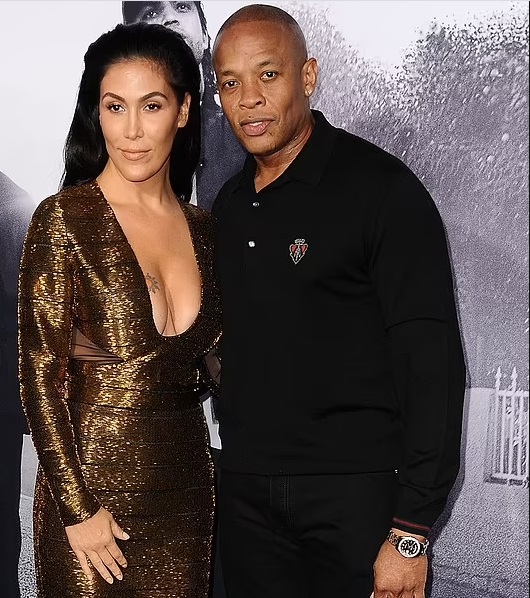 Nicole and Dr Dre
A judge has given Hip Hop mogul, Dr. Dre an order to pay his wife an 'extra $1.55million' in attorney fees.
Dre's wife is Nicole Young.
According to The Blast, a judge issued a 'temporary order' in the pair's ongoing divorce case laying out how much Dre is expected to pay Young, including spousal support and legal fees.
In the court docs obtained by the publication, the judge cited the 'disparity' of assets between Dre and Young, as well as 'attorney's training and experience in family law,' as reasons for the uptick in fees.
'Ms. Samantha F. Spector and Lisa Helfend Meyer, certified family law specialists, have significant years of experience in family law and have extensive practical experience in complex family law matters,' the judge writes.
'Considering the level of the case's complexity, and the issues involved, an attorney of their level and skill is reasonably necessary; and therefore, the various hourly rates of the primary and secondary attorneys participating in this litigation are reasonable and justifiable.
In regards to the heft nature of the fees, the judge continued: 'Considering what is just and reasonable and using the Court’s own experience and knowledge that the payee’s reasonable fees are $3,000,000.00 and costs are $ 550,000.00.'
Dr.Dre is being ordered to 'pay all of the lawyer's fees based on the "disparity" that exists between the two parties' assets and income.
'Nicole has assets totaling "approximately 39 million dollars" and Dr. Dre has approximately "243 million dollars,"' the court order states.
It is also noted that the payments Nicole is to receive are 'only good through July of 2021' and that she and her former spouse, who are now declared legally single, are 'being asked to meet and confer over what the costs might be to take the case to trial.'
There is also no budging on the already declared $300,000 a month in spousal support Dre is expected to pay Nicole, a decision that was reiterated in the judge's recent court order.
The Blast stated that Dre may not have to fret over the payout since much of his 'fees are being offset by living expenses and other payments for the couple's homes, security, and other expenses.'
Back in January, The 56-year-old rapper/producer agreed to pay Young $2million to 'cover all' of her bills, as well as an additional $500,000 for legal fees, as reported by TMZ.
Nicole had originally asked for $5million to pay her lawyers and $2million in monthly spousal support, neither of which were granted or agreed upon.
In court documents obtained by DailyMail.com in April, Dre was ordered by the judge to hand over another $500,000 to his former spouse's attorneys.
In July, it was ruled that Dre would pay nearly $300,000 per month to his ex in spousal support for the foreseeable future, instead of the proposed $5million she was seeking.
The recent order from the court comes just weeks after Dr. Dre filed a lawsuit accusing Nicole of 'embezzling' funds from his recording studio business.  He is suing her for allegedly taking money out of accounts for his Recording One music studio in Los Angeles' Sherman Oaks neighborhood, according to legal filings obtained by The Blast.
The legal filings indicate that Recording One was formed in 2015 to operate as a recording studio.
Both Dre (who was born Andre Young) and his then-wife were in charge of 'maintenance and control' of the studio assets, and Recording One claims that Young was in charge of writing charges and transferring money for the business.
The studio contends that she 'decimated' its bank accounts by withdrawing $353,571.85 in the early stages of her divorce from from Dre, which she filed for in June of 2020.
Amid the divorce proceedings, she was removed from the studio's trust.
In its filing, the studio argues that Young 'egregiously' failed to uphold her fiduciary interest by 'embezzling and stealing money from (the company's) bank account, and using the money for her own, personal obligations.'
Young could find herself in serious legal trouble if the studio's allegations are found to be true.
Top Stories