Alison-Madueke was believed to have sunk the bribes into Mr Jonathan’s reelection campaign, the charges said. 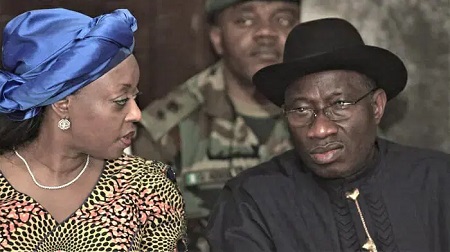 Allison and Jonathan
According to the Federal Bureau of Investigation, a former Nigeria’s Minister of Petroleum Resources, Diezani Alison-Madueke forced contractors of the Nigerian National Petroleum Corporation to pay $300,000 per month as bribes for oil deals to support the then-President Goodluck Jonathan’s fated reelection bid.
This is according to court documents filed by the FBI.
Information released by the Peoples Gazettte revealed that the information were part of an affidavit filed in the ongoing money laundering case against Anthony Stimler, a British national and former West African executive at energy trading giant, Glencore.
American prosecutors, relying on FBI investigations, alleged in the court filings that Stimler as well as other local and international oil brokers paid bribes to Alison-Madueke in exchange for oil contracts under favourable terms.
Alison-Madueke was believed to have sunk the bribes into Mr Jonathan’s reelection campaign, the charges said.
“On or about September 25, 2014, Co-conspirator 6 sent an email to STIMLER advising that Foreign Official 1 had stated that “all the customers of NNPC are giving in advance [$300,000] each month/cargo plus a certain amount which varies at the moment” in connection with a then-upcoming political election,” the document said.
Alison-Madueke has since been identified by multiple sources including Bloomberg as the ‘Foreign Official 1’ referenced in the document.
The bribery scheme was also aimed at providing more lucrative grades of oil to Glencore and other foreign multinationals with active contracts with the state-run NNPC at the time, court filings said.
NNPC under Alison-Madueke was also accused of receiving $200,000 on oil cargoes $50,000 around April 2015 that were slated to be delivered at the end of the year.
Stimler, working at the time for the Swiss-based Glencore, facilitated financial transfers from Switzerland to NNPC officials in Nigeria while traveling in the United States, consequently violating the Foreign Corrupt Practices Act for which he is being tried in a federal court in New York.
Jonathan and Alison-Madueke have long been accused of oil revenue theft, with the UK’s Department for International Development reporting that over $32 billion was misappropriated during their administration. Although they have never been tried, their associates across the Atlantic have had their assets seized on charges of money laundering, corruption, bribery and racketeering.
This is coming a few days after Bloomberg reported that the NNPC also received at least $900,000 in bribes from oil deals that went straight to President Muhammadu Buhari’s reelection campaign in 2019. Although Buhari maintained his so-called incorruptibility, his office has yet to deny the U.S. bribery charges.
Top Stories