We Saved One Million Jobs, Prevented Shutdown Of 150,000 SMEs — Osinbajo


This is as he said that social protection schemes can break the cycle of poverty, give real access to jobs, economic opportunities, and improve human capacity. 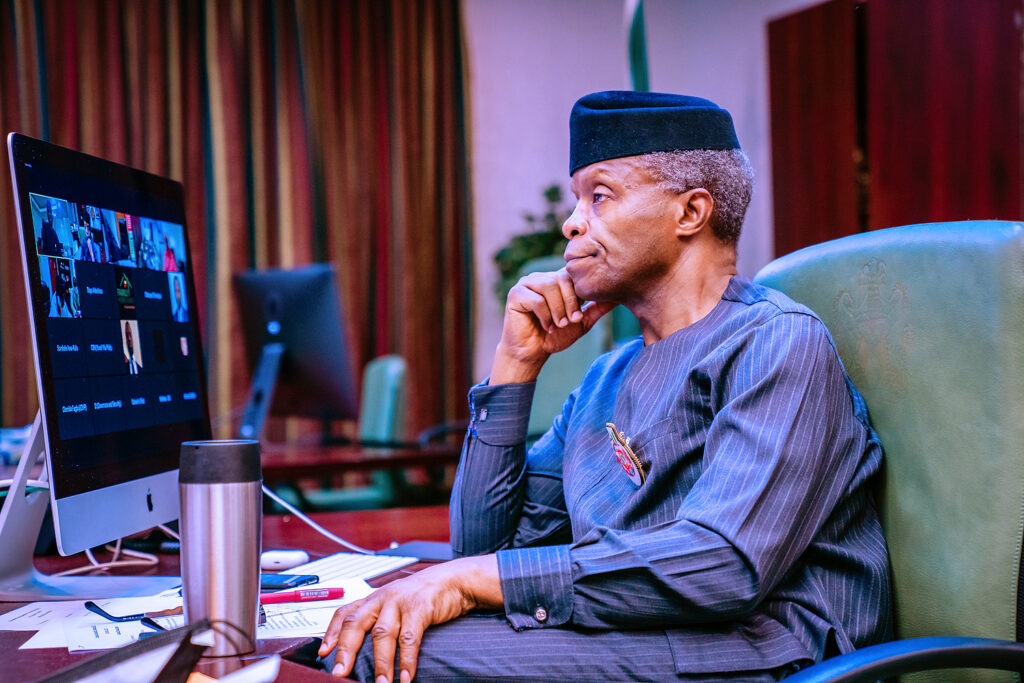 Yemi Osinbajo, the Nigerian Vice-President, has revealed that through the Economic Sustainability Plan, the present government has succeeded in saving over one million jobs and forestalled the closure of over 150,000 small businesses hit by the COVID-19 pandemic.

This is as he said that social protection schemes can break the cycle of poverty, give real access to jobs, economic opportunities, and improve human capacity.

Osinbajo said this on Tuesday in Abuja while speaking virtually during a United Nations High-Level Forum on Jobs and Social Protection.

Senior Special Assistant to the Vice-President on Media and Publicity, Laolu Akande, disclosed this in a statement titled, ‘Why social protection schemes are crucial, by Osinbajo at UN high-level forum on jobs’.

According to him, Nigeria’s response to the fallouts of COVID-19 was guided by the conviction that “social protection schemes are crucial, and can break the cycle of poverty, give real access to jobs and economic opportunities, and improve human capacity and productivity.”

He added that the Economic Sustainability Plan which was the government’s response is aimed at restoring growth by mitigating the macro-economic shocks, tackling the health challenge, averting business closures, protecting and creating jobs, protecting the poor and vulnerable while repositioning the economy for future resilience.

The Vice-President further explained that “in addition to scaling up health interventions, the Plan contained labour-intensive interventions in agriculture, housing, and public works programmes and the provision of solar energy to 5 million homes.

“The ESP also had a Survival Fund which gave payroll support to small businesses in manufacturing and services as well as to artisans and transporters. As a result of our interventions, we have been able to provide finance and off-take opportunities for millions of farmers.

“We have also been able to save up to one million jobs and prevented the close-down of at least 150,000 small businesses. We are also able to extend support to vulnerable groups by deepening our existing social intervention programmes and the development of a Rapid Response Register for cash transfers to the urban poor.”

He noted that poor financial resources remain a constraint to achieving set objectives, saying “the importance of the recently approved increase of $650 billion in SDR allocations for improving global liquidity.”

The Vice President was referring to Special Drawing Rights; supplementary foreign exchange reserve assets defined and maintained by the International Monetary Fund which represent a claim to currency held by IMF member countries for which they may be exchanged.

He also restated the call for improved access to vaccines and sustained funding of gas projects, stating that “we believe also that the already challenging global environment is now being further complicated by lack of access to vaccines as well as by policy moves in developed economies and international financial institutions to defund gas projects.”

On climate change, he said “it is clear that climate change and environmental damage will harm the prospect of creating jobs in many countries of the world including ours. Yet we know that access to energy is vital for generating the fast growth required to create jobs and to provide the resources for social protection.

“For a gas-rich country like Nigeria, we have to deploy gas not only for electricity but also to reduce the carbon emissions that result from the use of firewood and coal for cooking.”