Bishop Resigns After Falling In Love With a Woman (Photos)


Xavier Novell, 52, announced last month that he was resigning from his post as Bishop of Solsona in Catalonia for “strictly personal reasons”. 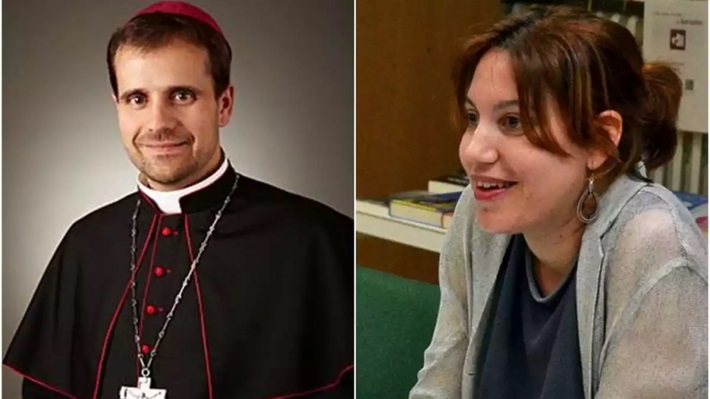 Novell fell in love with the woman who is divorced
A Spanish bishop has resigned from his position to pursue his love interest.
It was gathered that the bishop identified as Xavier Novell, 52 fell in love with a divorced author of satanic-themed eroticas.
Novell announced last month that he was resigning from his post as Bishop of Solsona in Catalonia for “strictly personal reasons”.
On Monday, it was revealed by Religion Digital, a news site, that Novell had fallen for Silvia Caballol, a divorced mother-of-two.
Novell reportedly said he had ‘fallen in love’ and ‘wanted to do the right thing.’
Caballol, 38, is a writer of erotic novels featuring characters ‘possessed by the demon of lust’, a fact which has raised eyebrows among Novell’s former colleagues.
However, Novell is likely no stranger to the demonic, having been among the handful of Spanish bishops to decline having an exorcist appointed in 2015, opting instead to perform the role himself. He reportedly met Caballol, a psychologist who has studied sexology, yoga, Catholicism and Islam, after he was began studying demonology.
Her books are described by her publisher as turning ‘all our moral and ethical considerations upside down.’
The Hell in Gabriel’s Lust, Caballol’s most recent book, promises ‘prisons, psychopathy, sects, sadism, madness, lust and, little by little, as the story progresses… the unreality of immortality and the crude struggle between good and evil, between God and Satan, and between angels and demons.’
Novell had been seen as a star on the rise within Spain’s Catholic church after being appointed as the country’s youngest bishop in 2010 when he was just 41.
However his ascent stalled, The Times reported, with the election of Pope Francis in 2013.
Francis has edged the Vatican towards more liberal stances than those espoused by his traditionalist predecessor Pope Benedict XVI.
Silvia Caballol’s latest book “The Hell in Gabriel’s Lust”
Novell, who has defended gay conversion therapy and described abortion and euthanasia as ‘genocide’, is out of step with the mood of the church under Francis.
His resignation was accepted by the Pope and the church has not commented.
Novell also set himself apart as the only bishop to openly vote in the 2017 controversial Catalan independence referendum illegal under Spanish law.
Top Stories