Despite having regular periods and no symptoms except for a bit of heartburn, the Year 11 pupil discovered she was about to have a baby. 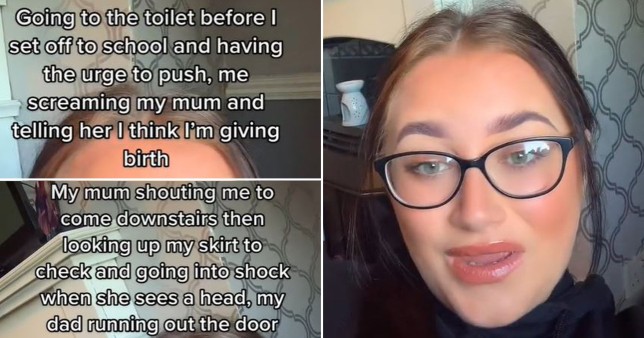 The story has been told of a 15-year-old girl who did not know she was pregnant until she went into labour.

The young girl only knew she was pregnant after she went into in front of her parents on the living room floor in their family home.

Despite having regular periods and no symptoms except for a bit of heartburn, the Year 11 pupil discovered she was about to have a baby on the night after first day back to school.

As she was getting ready to go to bed, she began feeling pain in her lower back and screamed for her mum, who was shocked by what she was seeing.

The TikTok user, who uses the name Alexis on the platform, has now shared intimate details about how she gave birth to her son Harry on September 6, 2017, in a viral video.

As her mum checked under her skirt, she saw the top of the baby’s head through the opening of her daughter’s vagina.

alexis.queen18 said: ‘My mum mentioning she had heartburn when pregnant with me, me realising I have had a bit of heartburn lately and taking a pregnancy test during the summer holidays.

‘The test being negative and me still having regular periods and no more symptoms, goes back to school for my 1st day in [year] 11 on September 5.

‘Having a perfectly OK day back at school. Getting ready for bed having a bit of back pain so taking painkillers and thinking nothing of it.

‘Not sleeping all night due to the constant back pain, waking my mum and dad up at 6am telling them and they think I’m just trying to get a day off so into my uniform I get.

‘Going to the toilet before I set off to school and having the urge to push, me screaming [for] my mum and telling her I think I’m giving birth.

‘My mum shouting me to come downstairs then looking up my skirt to check and going into shock when she sees a head, my dad running out the door for pregnancy test.

‘Ended up giving birth to my baby on the living room floor with no knowledge I was [pregnant].’

The teenager confirmed she had regular periods and no symptoms, bump or signs of pregnancy.

In addition, she took a pregnancy test in the summer, which was negative.

The new mum added she went through a cryptic pregnancy, which conventional medical testing methods may fail to detect.

While it may be hard to imagine, most women with this condition discover they are pregnant after week 20 and others, which is rarer, do not find out until they are in labour.