During his detention at the facility, the Army allegedly subjected him to dehumanising treatments by chaining his hands and legs. 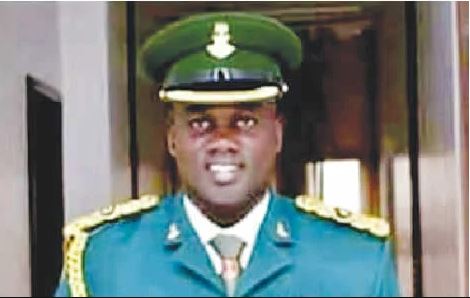 Major Akeem Oseni, a Nigerian military officer, has dragged the Nigerian Army to court for N2bn over the alleged torture he suffered for 10 months during his detention at the Military Police Headquarters in the Federal Capital Territory, Abuja, according to The PUNCH.

During his detention at the facility, the Army allegedly subjected him to dehumanising treatments by chaining his hands and legs.

The embattled officer also joined in the suit the First City Monument Bank Plc for allegedly placing a post-no-debit on his account without a court order.

PUNCH Metro learnt that Akeem was held in the detention centre from February 11 to December 17, 2020 over the death of a junior colleague, Lance Corporal Benjamin Collins.

He was tried and jailed for 10 years by the court-martial; the sentence was also confirmed by the Army council.

Akeem was then transferred from the detention facility to the Kuje Custodial Centre.

His elder brother, Saheed, said the ruling had been appealed, adding that his brother was being unjustly punished.

According to him, Akeem’s ordeal started when a former Chief of Staff, Army Headquarters Garrison ordered him and three other officers to drill the late Collins for attempting a jailbreak.

He said, “My brother narrated all that transpired when I visited him at Kuje prison and it is quite unfortunate that he is suffering because he executed an order from a superior officer.

“Akeem and three other officers, (Major O.U. Osawe; Captain S. Amosu, and Lieutenant Dogary), were asked to drill a junior officer who attempted a jailbreak.

“My brother supervised as one of the officers drilled the lance corporal. Unfortunately, the guy got sick and was taken to a hospital where he died.

“He and the other officers were court-martialed and sentenced to 10 years’ imprisonment each. My brother is currently serving the term, but has since lodged an appeal against his conviction.”

Saheed, however, lamented that the other officers had been acquitted and freed by the Army.

“This is suspicious as we feel somebody somewhere is using influence to oppress my brother who, alongside the other freed officers, carried out an official duty that unfortunately led to the soldier’s death.

“Because of this incident, his wife and children were thrown into hardship as his FCMB account was placed on post-no-debit. My brother also said the Army ransacked his residence and carted away money and valuables worth millions of naira,” he added.

One of the legal documents filed in court by Ozekhome read in part, “That the act of the 2nd respondent (First City Monument Bank Plc) placing the personal account of the applicant (Akeem Oseni) domiciled with FCMB, with account number: 2656152013, on a post-no-debit from February 2020, till date on the directives of the Nigerian Army, without a valid court order or affording him adequate time and facility to be heard is illegal, wrongful, unlawful and constitutes a blatant violation of the applicants’ fundamental rights to fair hearing.”

Reacting, the Army spokesman, Onyema Nwachukwu, said, “Major Akeem Oseni was court-martialed for the murder of a soldier. He even escaped from custody when he was arrested for the offence and was rearrested in Benin Republic.

“He was sentenced to 10 years’ imprisonment by the court-martial and this was confirmed by the Army council last year. I understand he has appealed and the matter is in court. Hence, it will be sub judice to comment on the issue.  No one broke into his residence as falsely claimed and no money was carted away.”

The Head, Communications, FCMB, Adeola Adejokun, said the bank had yet to receive any court processes on the matter.