People's Gazette reports that Isaka, which is about 5km from Port Harcourt, is a fishing community in a maze of creeks. 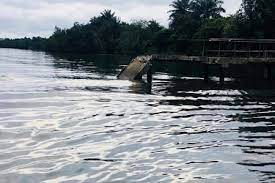 In what will come across as a really heartbreaking development, as many as 20 people were feared killed and 10 others missing as a jetty suddenly collapsed near Port Harcourt in Rivers State on Saturday.

It was learnt that the people of Isaka in the Okrika Local Government Area had complained about the deteriorating condition of the jetty to the state government but no solution was provided by the Nyesom Wike-led government.

People's Gazette reports that Isaka, which is about 5km from Port Harcourt, is a fishing community in a maze of creeks.

It can only be accessed by water.

It was also gathered that the jetty was crowded by commuters who were in the town for a burial, when it suddenly collapsed.

During the incident, local divers attempted to rescue the victims but there were fears that many of those who drowned were already dead.

No medical and other emergency services were immediately made available at the scene during the incident.

A community leader, Same Aaron who informed journalists about the incident lamented the tragedy.

However, residents could not immediately ascertain the number of caualties as rescue efforts were still ongoing on Sunday morning.

The mishap came weeks after a boat submerged in River Niger, killing scores of people between Kebbi and Niger states, in North Central Nigeria.