‘We Are Sorry For Insulting You’ – IPOB Apologises To Nwodo


The group apologized for insulting him following alleged comments on killings in the Southeast. 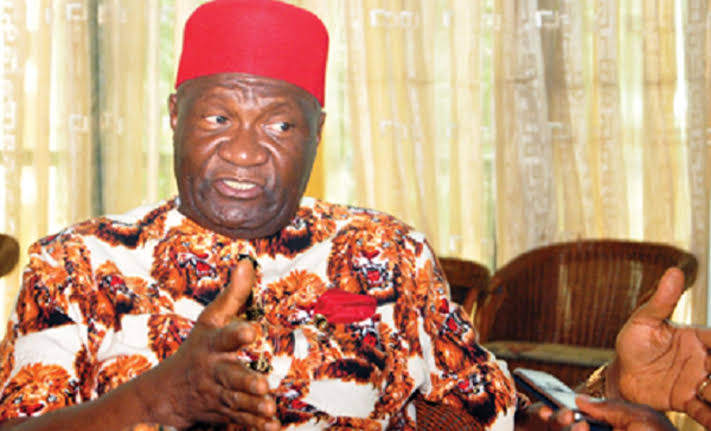 Chief John Nnia Nwodo
An apology has been tendered by the proscribed Indigenous People of Biafra (IPOB) to elder statesman, Chief John Nnia Nwodo.
The group apologised for insulting him following alleged comments on killings in the Southeast.
Recall that IPOB had claimed that the former President General of Ohanaeze Ndigbo linked the group to series of killings in the region.
The proscribed group challenged Nwodo to provide evidence they are behind the killings in Anambra and Imo states, describing the allegations as fallacious and ridiculous.
However, Nwodo had also denied linking IPOB to the violence and killings taking place in the South East, adding that he has never blamed the group for the insecurity in the region.
The Igbo leader added that he has deliberately been silent since he is no longer the Ohanaeze’s leader, so as not to affect his successor.
But in a statement on Tuesday by its Media and Publicity Secretary, Emma Powerful, IPOB tendered an unreserved apology to the former President General of Ohanaeze.
The group stated that it has retracted the comments on Nwodo, saying they erroneously attributed comments from Okwesilieze Nwodo to him.
“We wish to apologise to Chief John Nnia Nwodo for erroneously attributing the garbage from Okwesilieze Nwodo to him. This erroneous mix up was unintended and is hereby retracted,” it said.
The pro-Biafran group warned against linking it with the insecurity in the Southeast, particularly in Anambra and Imo states, maintaining that it had no hand in the ugly trend.
Top Stories