'Well, So I, I, You Know' - Buhari's Aide Struggles To Defend His Twitter Ban On CNN


Mr Ogunlesi appeared on a CNN segment with Larry Madowo on Wednesday, where he was asked whether he was in support of the ban or not. 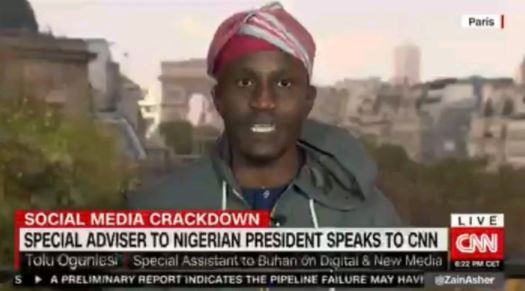 Buhari's aide, Ogunlesi
There was a bit of drama on Wednesday as an aide to President Muhammadu Buhari failed in a bid to defend his Twitter ban after appearing on CNN.
He was interviewed on a CNN segment with Larry Madowo on Wednesday, where he was asked whether he was in support of the ban or not,according to Peoples Gazette.
When asked why Buhari's government has refused to lift the ban on Twitter after several months, he responded:
“Ahm well, so I, I, I, you know, I’m not, you know, the government of Nigeria has made a decision.
You know aah.. and for me, no it’s so, I’m not sure that’s the question you should be asking me,” Mr Ogunlesi said as the host pushed him to give a yes or no response.
“I think it’s a win-win actually for both twitter and the government of Nigeria.
That’s certainly the view I get out of the um negotiations. It’s a win-win for both parties and ehm, I’m happy about that?”
Mr Madowo quickly pushed back that the unconstitutional and repressive measure could not have been a win-win as Mr Ogunlesi suggested because Nigerians have already deployed VPNs to bypass the restriction and continue to use Twitter to carry out their businesses and comment on state policies.
Following the ban in Nigeria on June 4, Mr Ogunlesi and fellow supporters of the Buhari-led regime, including Bashir Ahmad, Ajuri Ngelale, Philip Obin, Abubakar Sidiq Usman, stopped using Twitter to engage online.
They moved to , an Indian social networking platform used by less than 200,000 of Nigeria’s over 200 million population.
Information minister Lai Mohammed, while announcing the suspension in a press statement on June 4, said Twitter activities were capable of undermining Nigeria’s national security and corporate existence.
The ban was ordered days after Twitter removed Mr Buhari’s tweet for threatening genocide against Nigerians of Igbo ethnic group who have long oppossed his sectional and exclusive government.
Attorney-General Abubakar Malami also said the ban was ordered because using Twitter in Nigeria was seditious, a claim that has been condemned by rights activists.
Since the ban in June, Nigerian government officials had been in a series of meetings with Twitter, but neither party would disclose the details of ongoing discussions.
Twitter, however, assured repeatedly to Peoples Gazette that the talks have been cordial and fruitful.
Mr Ogunlesi, an opinion writer and former critic of the political elite, quickly switched sides when he was asked to be one of the president’s dozens of new media assistants in 2016.
He has continued to defend the government’s actions, even when they conflict with his previously-held positions.
Following the murder of at least nine #EndSARS protesters in Lagos on October 20, 2020, Mr Ogunlesi disappeared from social media.
He, however, returned a few weeks later to continue his service to the Buhari regime, beginning first with a Medium article that many readers criticised as a show of support for the soldiers’ brutality.
Top Stories