The suspect parading himself as a police officer to dispossess innocent persons of their legitimate earnings has been arrested. 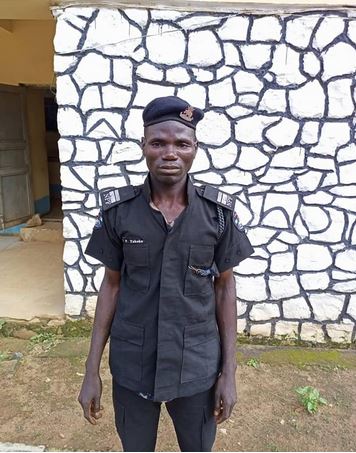 One of the suspects, SP Usman Magaji

Two men parading as police operatives and engaging in extortion, robbery and  illegal arrest have been apprehended by the Kaduna State Police Command.

Spokesperson of the command, ASP Muhammad Jalige, in a statement on Thursday, October 7, said three sets of police uniform were recovered from the suspects.

"On the 5th October, 2021 the Command received an information that one Superintendent of Police is seen around Mamadi Layout Rigachikun Kaduna, making illegal arrest and extorting money from unsuspecting members of the public," he stated.

"On receipt of the information, Officers were immediately mobilized to the area and succeeded in arresting one fake Police Officer who is parading himself as SP Usman Magaji and criminally dispossessing innocent persons of their legitimate earnings

"Upon investigation, two sets of neon blue Police uniform were found in his possession. The suspect has since confessed to the crime and will be charged to court on completion of investigation. The Command is therefore calling on the public to report any of such persons to the nearest Police formation."

In a similar development, the Command had on 5th October, 2021 while investigating a case of armed robbery arrested one Pius Philips 'M' and recovered a complete police uniform bearing the name Pius Philips with an Inspectorate cadre's rank.

Jalige said during the course of investigation, the suspect confessed to have been using the uniform for some nefarious activities.

The suspect will be charged to court after completion of investigation, he added.