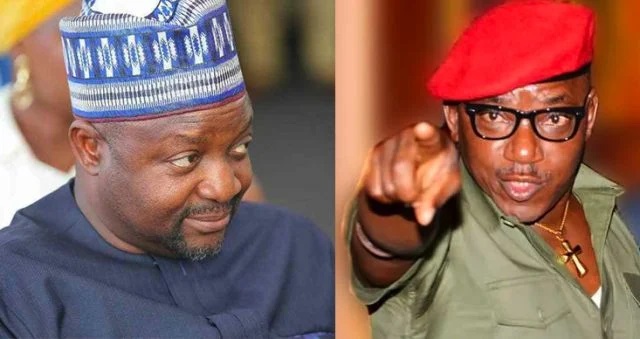 Dare and Dalung
A former minister of sports, Solomon Dalung has lashed out at the current Minister of Sports, Sunday Dare.
The latest faceoff is as a result of the accusation that Dare allegedly diverted bonuses and allowances of Nigeria women’s basketball team, D’Tigress.
Dare had however said he was not a minister when the money was approved, pointing accusing fingers at Dalung.
However, Dalung while responding said the N1 billion had been approved by President Muhammadu Buhari and released since August 2019 for the basketballers’ bonuses.
The former minister was reacting to a comment made by Sunday Dare that he was not the minister when the bonuses were owed.
In a video uploaded on the official Facebook page of the Federal Ministry of Youth & Sports Development, Nigeria, the minister had said, “These are allowances that are owed since 2017 when I was not even the minister.”
The minister also clarified that the fund was not diverted.
The PUNCH had reported that members of D’Tigress had expressed their anger in a viral video, claiming that they are being owed allowances and bonuses.
The women’s basketballers also threatened to boycott future call-ups to represent Nigeria for the 2022 World Cup qualification series if all outstanding allowances are not paid.
In the video clip, Ify Ibekwe, one of the prominent figures in the D’Tigress, listed the figures owed and also included the $100,000 donation which was given to the team by three Nigerian banks in preparation for the Tokyo 2020 Olympics.
Dalung, who was sports minister between 2016 and May 2019, asked Dare to come out clean and stop blaming him.
In an interview on Arise TV on Friday, Dalung said, “In 2017, there were no issues. Because when they won, I was given three days notice, and I immediately reached out to the presidency and got them to meet with the federal executive councils,” Dalung said.
“The president appreciated them, and the handshake was with N1 million each for the players and N500,000 for the coaching crew. Immediately after the FEC meeting, they provided their account details to the ministry in less than 24 hours and this money were disbursed to them. So no issue in 2017.
“The issues we are talking about are as a result of their participation at the 2018 FIBA World Cup. We had budgetary issues with their qualification because there was a provision made in the budget, which was presented to the national assembly and returned far below what we expected. Which we now have to fall back on intervention, and I approached the president, and he said, ‘put up your memo for me to consider.’
“And the federation presented a memo of about N1.5 billion covering their preparation and participation in the 2018 World Cup. This memo was not even presented to the ministry on time, so we were caught up with a way to spend. Then the president of the federation said we could be able to raise funds to sustain the competition, and we could address the issues later.
“The girls went to the competition and made the country proud. So when we came back, I approached the president and he approved N1 billion, covering the cost. I kept pursuing it, and the funds were not released until when I left office. The funds were released in August 2019. N1 billion approved by the president came out in August 2019. And I wasn’t the minister then. So passing the buck of the blame to me is not the best way. The best way is for the ministry to come out clean and apologise.”
Top Stories