Some corrupt Nigeria Immigration Service officials have been caught by the Acting Comptroller-General. 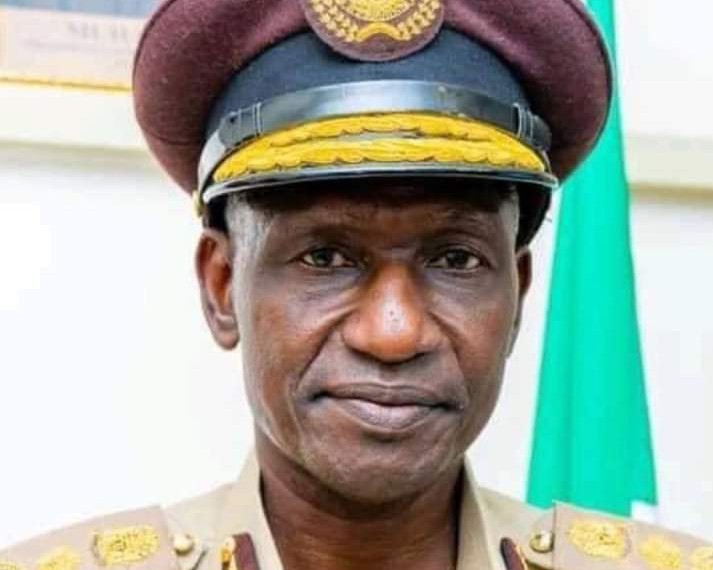 Idris
Some corrupt elements in the Nigeria Immigration Service have been caught by the Acting Comptroller-General of Nigeria Immigration Service (NIS), Isa Jere Idris, on Monday.
This happened after he disguised as an applicant for an international passport at the Lagos State Command, Ikoyi, where he alleged that some officers of the service offered to engage in shady deals with him.
Mr Idris, in an exclusive interview with PREMIUM TIMES on the phone, said he decided to walk in unannounced in order to gain firsthand experience of what Nigerians are going through “in the hands of unscrupulous officers of NIS.”
The acting CG said when he assumed office in September, he had pledged to tackle three things including addressing the challenges faced by Nigerians in their efforts to procure international passports, enhance border security and improve workers’ welfare.
He said his unscheduled visit to Ikoyi on Monday was to confirm the allegations against officers of the immigration offices in Lagos State including Ikoyi, Ikeja and FESTAC town.
Ikoyi experience:
He said when he approached the officers at the Ikoyi command, he was given various high prices for the different categories of passports.
“When I approached the officers, they offered me the menu without recognising me. They said 32 pages of the international passport for five years would cost me N45,000 instead of N27,000. They said 64 pages for five year would cost me N55,000 instead of N37,000, and N95,000 for 64 pages for 10 years instead of N72,000.
“I was asked where I was from and I said Niger State. They also asked me if I had a letter of indigeneship and other documents and I said I didn’t have any one. So they said they would collect N3,500 to provide all the documents for me,” he said.
The immigration boss said as of the time of speaking to our reporter on the phone, the officers were yet to know who he was, and that the Comptroller for Lagos Command of the service, Bauchi Aliyu, was surprised when he eventually showed up in his office.
“You know he just returned to Lagos from Abuja. He didn’t know that I was coming to town. So he is still shocked as I am talking to you,” he said.
What next?
Mr Idris said the lesson will help the service to strengthen the passport issuance process, saying having an international passport of a country confers nationality on its holder and so it must have integrity.
“So with what I have experienced firsthand today, it simply means that anybody can come in from anywhere and obtain our passport. This is unacceptable. So I can assure you that the Immigration Service under our watch will strengthen the issuance process and the integrity of the document,” the acting CG said.
Launch of appointment platform
Mr Idris said in the next two weeks the service with the support of the Interior Minister, Rauf Aregbesola, will launch an appointment platform for applicants, saying the idea of anybody approaching passport offices anytime for issuance cannot continue.
He said: “The document has integrity and so the processes of issuing it must have integrity. We must verify attached relevant documents because with what I saw this morning anybody can claim to be who he or she is not.
“So within a maximum of three weeks passport renewal must be done, but we must also ensure relevant background checks on the applicants especially based on their letters of indigeneship and birth certificates. What they do with these documents by the syndicates is to backdate them.”
He said except in some exceptional cases, there is nowhere in the world where passports are produced in one day, saying Nigeria must adopt global best practices in order to ensure the integrity of our documents and their sanctity.
“If you claim you are from Kano or Rivers we must find out if your claims are true or not,” he added.
Officers caught
He said the officers caught in the act during his unscheduled visit have been documented and that they would be disciplined accordingly.
“The laws are there, and so they will be made to face the law. There are about three of them but we are very sure that it is an organised crime. They are not alone but further investigations would reveal that,” he said.
The acting comptroller-general said the interior minister is working hard towards achieving his mandates of securing the nation’s border lines through the agencies under him including the immigration service and that the difficulties being experienced by Nigerians in procuring passports would soon become a thing of the past.
Mr Idris said he was committed to addressing the challenge of corruption in the service.
Top Stories