The suspects allegedly stole the newborn and altered the birth notification details when the infant’s young mother was fighting for her life at a labour ward. 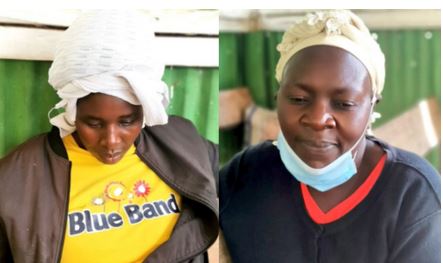 Two women arrested by the detectives from the Directorate of Criminal Investigations (DCI) on October 15 for allegedly stealing a newborn risk 30-year jail term.

In a statement by the DCI, the two, Judith Ingahitzu, 47 and her aunt Florence Musimbi Abulu, 62, are alleged that they played good samaritans before stealing a new-born baby boy and altered the birth notification details when the infant’s young mother was fighting for her life at a labour ward.

This was reported by a curious member of the public who says none of the women who appeared with the newborn had been spotted pregnant.

The detectives would then commence on a fact-finding mission in Kakamega’s Matete area where they found the first suspect.

Judith was reportedly found lulling ‘her’ bundle of joy and could not stand her unwelcomed quests prompting her husband to engage them.

“The mother of four older children could hardly stand the presence of her unwelcome visitors, but her husband, with whom she has had no child over their marriage period, invited the detectives’ probe into the case,” part of the statement reads.

The husband went forth and spilt the beans stating that he hadn’t been aware of his wife’s pregnancy until she appeared holding a day-old toddler that she wouldn’t breastfeed.

Further, the birth notification provided by Judith had been altered using a whiteout, and the parents’ names were handwritten.

Judith however denied and insisted she had been pregnant a situation that lead the detectives to request for a medical examination which turned negative.

They also run a DNA test at a different hospital in Kisumu which equally contradicted the suspect’s allegations.

It was at this point where Judith opened up to the detectives and revealed the second suspect her aunt who lived in Kikuya village in Vihiga.

It turned out that Florence was behind all this as she preyed on a pregnant 17-year-old girl living with her grandmother.

She approached her with a job offer as a house help in Nairobi, which the helpless minor accepted and was later connected to her employer who lived in Kajiado’s Ongata Rongai.

Florence warned the young girl not to reveal to any of her relatives that she was expectant, before instructing the girl’s employer to release the girl as soon as she was due for labour.

“As agreed, the orphan girl had been picked by Florence 10 days to her delivery date, who stayed with her for the period before taking her to Vihiga Health Centre on September 8 where Judith appeared, tendering her till she gave birth to a baby boy. It was in the process of collecting the documents on behalf of the young mother that Judith, who was hell-bent to steal the baby, altered the documents before disappearing with the baby,” the statement read in parts.

The young mother was later reunited with her baby boy while the two ladies await a ruling.

In the meantime, the detectives are also on further investigations in pursuit of the man behind the girl’s pregnancy.