The repentant sex worker was rehabilitated by the Apostle Chibuzor of Omega Power Ministries. 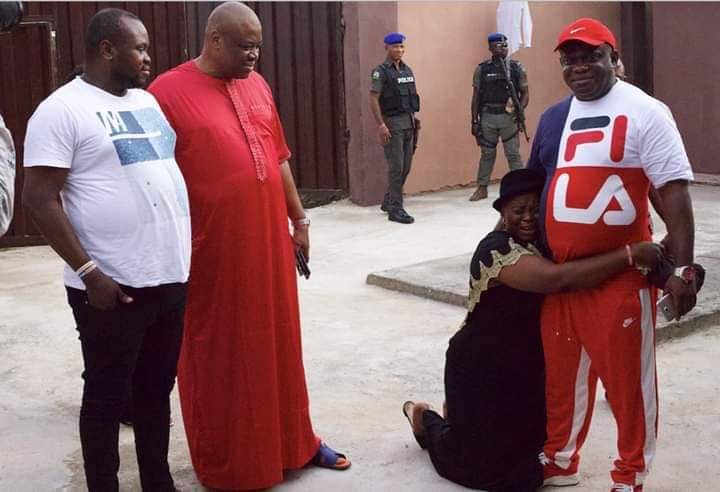 The ex-sex worker couldn't hide her happiness
An ex-sex worker has been given a 13 flat mini-estate as a wedding gift by the founder of Omega Fire Ministries, Apostle Chibuzor.
The church took to its social media page to share the cheerful news.
Read below:
TEARS OF JOY AS A FORMER SEX WORKER FORMALLY RECEIVES HER 13 FLAT MINI-ESTATE WEDDING GIFT.
After a repented and rehabilitated former sex worker dedicated her wedding card on the altar of OPM, Apostle Chibuzor was so touched and impressed with her advancement that he announced that he was gifting her an Estate for her wedding present, IgbereTV reports.
Blessing who was rescued by Apostle Chibuzor from a popular hotel in port harcourt after Apostle Chibuzor, welfare team and OPM Evangelism team visited different hotels for soul winning.
Blessing and other 35 sex workers followed the OPM team to an already furnished estate which became there new homes.
They were shown the love of Christ, taught the word of God, baptized and trained on various skills like hair making , tailoring, catering etc.
And businesses were opened for them.
Many them have gotten married , some have gotten jobs overseas, while are still waiting for there divine husbands.
Pictured below is a 13 flat estate that was being handed over to blessing as a wedding gift and also her daughter is currently studying Engineering under OPM overseas Scholarship in TURKEY.
Fully funded with offerings and tithes in OPM Church.
Top Stories