More than two dozen train stops passed as he harassed, groped and eventually r*ped the woman.

Officers of the police force have alleged that a woman was sexually assaulted by a homeless man on a train for 40 mins while passengers held their phones to record the attack but didn't call 911.

More than two dozen train stops passed as he harassed, groped and eventually raped the woman.

Ngoy who has been charged with rape, has a previous sex offense conviction and should have been deported back to Congo years ago.

Police said he went to sit next to the victim after boarding the El train at the same stop in northeast Philadelphia last Wednesday evening.

The train passed more than 20 stations as he harassed and groped her while she tried to fend him off, it is alleged.

Eventually he ripped off her clothes and raped her, police said.

It is believed no one on board called 911 or used the emergency call box fitted in the car, and it was also claimed some passengers instead used their phones to video the attack.

The woman's ordeal only ended when an off-duty train employee called police, who arrived within three minutes and pulled the rapist off her, according to an arrest affidavit.

Upper Darby Police Superintendent Timothy Bernhardt said it was “disturbing” to know people saw the attack and did nothing to help.

“I have no words for it. I just can’t imagine seeing what you were seeing through your own eyes.

“I’m appalled by those who did nothing to help this woman.

“We want everyone to be angry, disgusted, and to join us in being resolute in keeping our system safe.

“I can tell you that people were holding their phone up in the direction of this woman being attacked.”

Police have not released security camera footage or revealed how many other people were in the car. Supt Bernhardt said anyone who recorded the assault could face criminal charges.

Ngoy told police that he knew the victim, but that he couldn’t remember her name. He told authorities she consented. The woman told police his version of events was false, and further revealed that he ignored her pleas for him to leave her alone.

A security video is said to show her repeatedly pushing him away as he groped her breast, reports the Philadelphia Inquirer.

Ngoy has been charged with rape, sexual assault and other offenses and was held in custody.

The suspect who listed his last address as a homeless shelter, remains in custody on a $180,000 bail. His initial court appearance is scheduled for October 25. 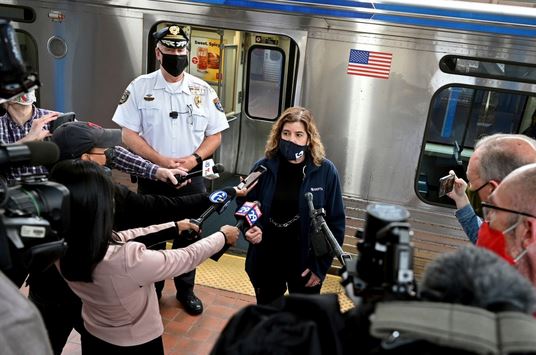