The suspects have been identified as Chinesi Omuka aged 35 and 28-year-old Ejike Enebenchu. 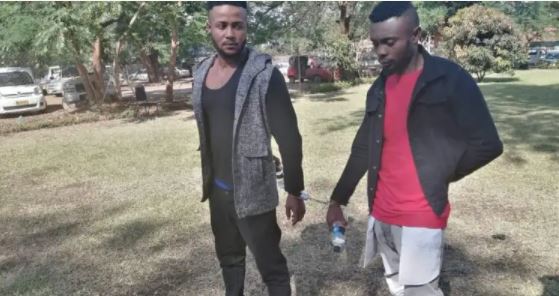 The suspects
Chinesi Omuka and Ejike Enebenchu have been arrested in Malami.
The Nigerians aged 35 and 28 were apprehended at Area 49 in Lilongwe after being found with 11 grams of cocaine.
The suspects have been identified as Chinesi Omuka aged 35 and 28-year-old Ejike Enebenchu.
Police raided the home of the two at Area 49and it is suspected that the suspects were selling the drugs to Malawians.
According to Central West Region Police spokesperson, Enebenchu was also previously arrested over a similar offence. In July he was convicted and fined K200,000.
Malawians on social media have since questioned why Enebenchu was not deported after his conviction.
There are also concerns that the convict was only ordered to pay a fine for such an offence.
“Kindly help me to understand this: The police catch a drug dealer found selling cocaine to Malawians. The drug dealer is not Malawian; he is from Nigeria. He is arrested, the courts fine him K200,000 and is released. Turns out he is not deported at all, just left scot-free so he can sell more drugs to Malawians. Which is exactly what he did. Now they have arrested him again, in the company of an accomplice who also happens to be Nigerian. What does the law say about foreigners who end up being convicted of crimes? I know nothing about the law, but perhaps it says let them go scot-free so they can sell more drugs” wrote Onjezani Kenani on Facebook.
Another social media user said: “Probably we need to reviews our laws to reflect the situation on the ground. Seems we borrowed too much from somewhere else. You tend to wonder when you read some of the fines for some of the offenses! We can not be charging a fine of MK20,000 for a MK1,000,000 offense. That’s an insult. Anyway, I am not a legal expert too. This is but my opinion.”
Top Stories