Michael Muthini confessed that he committed the offence after appearing in court. 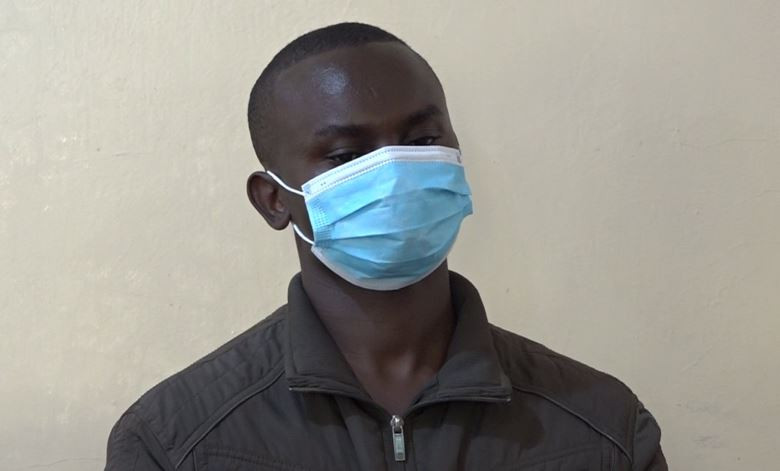 Muthini
A man, Michael Muthini might spend the rest of his life in prison after confessing to killing a Catholic Priest.
The suspect confessed that he killed the Catholic Reverend Father identified as Michael Maingi Kyengo from Machakos county in Kenya because he sodomized him.
Muthini said he got to know the Catholic Priest who was killed and buried in a shallow grave in Makima in 2017, during a mass session he participated in at Mbingoni Catholic church.
The accused through his lawyer Kirimi Guantai claimed that before the mass began, the father beckoned and asked to see him after the mass. Muthini claimed that after the mass, he went to see him but the cleric told him that he wanted to talk to him and since he had no time, he gave him his number so they could talk over the phone.
He informed the court that father Kyengo got closer to him, started visiting, texting and calling him on regular basis. The suspect told court that the late father even took the burden of paying his college fees and provided all his basic needs.
Muithini added that while he will call the cleric ”bro”, he will respond by calling him ”My dear” or ”Sweetheart”.
The suspect said their issue began after the father visited his rented house at Gategi in Mbeere South for the first time.
Muthini said;
”In September 2019 the late father called me and informed me that he was at Mwea town and said that he was going to stay at my place overnight as it was late for him to drive for a long distance via a rough road as he was headed to Machakos."
He disclosed that after they ate dinner, he proceeded to the bathroom to clean it so that the father could take shower.
Muthini claimed that while cleaning the bathroom, the father called him and told him that it was better if they could take some juice first which he had already served in two glasses. The suspect said after drinking the juice and proceeding to the bathroom to continue his cleaning, he began feeling dizzy and fell asleep.
He claimed he regained consciouness around 3:30am with a lot of pain around his anal areas, and a watery discharge around his buttocks.
Muthini told court that he found the late father seated next to him while naked and smiling. Upon realizing that he had allegedly been sodomized, he asked the father why he had done that to him and the deceased told him that he was not hard on him since he was new to such.
He said;
”He went ahead to caress me and told me that he had every right to do whatever he wanted as I had no means of repaying him what he had done for me earlier."
Muthini said when the father realised that he had become angry, he stood up, dressed, took his briefcase and said when he was at the door;
If I hurt you too much, take the money I put on the table and buy a chemist's medicine. Let me run to work and we'll talk
The suspect said he felt disillussioned in living, ashamed to tell anybody and he said he wanted to commit suicide. He also claimed to have called the cleric, threatening to report him to his Parish.
Muthini said the father pleaded with him not to report as it would interfere with his work. He promised to visit him the following week so that they could solve the matter in an amicable way.
The accused informed the court that on October 9, 2019, at around 8;30 pm, the father arrived at his house drunk, telling him that he (Muthini) was poor, only needed his money and have nowhere to run. Muthini said he felt insulted this time round.
He said;
”Instead of asking for forgiveness, he came towards me and started caressing me. When I resisted, he held me by force and that is when we started struggling."
The suspect also recalled how the cleric allegedly dipped his hand into his briefcase and took out a blue-ish plastic bottle, opened it and told him to calm down since ”they were sharing the same status”.
Muthini said that the late priest struck him and that was when he realised that the priest was going to kill him to erase the evidence. He informed the court that he fell where the panga (machete) was and as the priest was holding his throat, he reached the panga and cut his neck.
The suspect said;
”When I cut him, he released me and I thought he would stand but realised that he was over bleeding and within seconds he stopped breathing. That is when I realised that he was dead."
Father Michael Kyengo ‘disappeared’ on October 8, 2019, and was found murdered on October 16 and his body buried in a shallow grave in Masamba seasonal river in Makima Mbeere South, Embu county.
Michael Muthini was arrested at Kiboko along Nairobi’s Mombasa road on October 11 by DCI detectives while driving the priest’s car and he led the detectives to where father Kyengo’s body was buried.
The arrest of the suspect consequently led to the arrest of his accomplices Kavivya Mwangangi and Solomon Mutava.
Following the suspect's testimony, Embu High court judge Lucy Njuguna ordered a victim impact report to be tabled in court on November 8, 2021, before the judgement date is set.
Top Stories