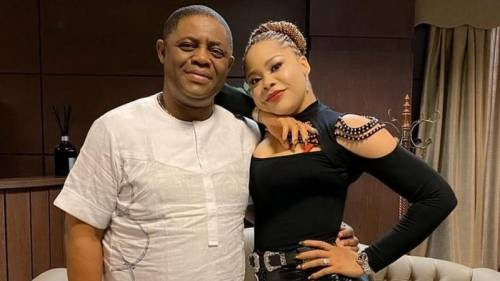 Femi Fani-Kayode, a former Aviation Minister, has joined issue at the Federal High Court, Abuja against Precious Chikwendu, his estranged wife, according to SaharaReporters.

Chikwendu, a former beauty queen, had instituted a fundamental rights enforcement suit at the Federal High Court against Fani-Kayode, the Inspector-General of Police, his officers and others wherein she is claiming the sum of N800 million as damages.

The plaintiff is demanding the said amount because of the alleged role played by the respondents in intimidating and harassing her during the pendency of her custody suit.

Specifically, Chikwendu has asked the court to restrain the IGP and his officers and men from threatening and harassing her in any form whatsoever pending the hearing and determination of her suit, which seeks the custody of her four children with Fani-Kayode.

However, in a bid to clear his name, the ex-minister has filed a counter affidavit in opposition to the suit, and therefore asked the court to dismiss the suit for lacking in merit as well as constituting an abuse of court process, Independent reports.

Fani-Kayode revealed that he has read the 23 paragraphs supporting the affidavit of his ex-wife and said, “I know that they are concocted facts, presented by subterfuge, in order to mislead the Court and frustrate the administration of justice."

“I know that the instant suit is nothing but a smoke screen intended to avoid the long arms of justice and to malign me. There is no merit whatsoever in this suit, which was filed in abuse of court and judicial process. It is in the interest of justice to dismiss this suit for lacking in merit.

"I conscientiously depose to this counter-affidavit from facts within my personal knowledge, and in good faith, believing same to be in accordance with the Oaths Act currently in force," the embattled former Minister stated.

On alleged separation from children, he stated, “Furthermore, contrary to Paragraphs 4 & 5, it is not correct that the Applicant was violently separated from her children.

“Rather, she elected to leave her matrimonial home and consciously abandon the children, in order to optimize without restraints, her extra-marital and inordinate sexual escapades”.

“As a fact, it is not surprising that Ms. Precious Chikwendu is capable of such reckless abandonment, because: whilst she was with me in the house afore described, she employed 12 in-house nannies to cater for the children, excluding supervisors and nurses who equally attend to them; the Applicant did not at anytime extend maternal care to the children, for the reason that she had a medical condition which deprived her of any filial bond with them; she deprived the children of the natural sucks or breast milk, also on account of the need to preserve her body shape, coupled with a contrived medical condition which she claimed would not permit her to breast feed them.”

He further noted, “Despite the enormity of the Applicant’s brazen amoral acts, several entities had been made to her, in returning home or visiting the children, but she completely rebuffed all.

“In a recent letter which was written to her Solicitor handling the matrimonial case, his attention was drawn to the fact that there has been no time that the Applicant was deprived physical access to her children, in as much as she has been speaking to them on the phone and doing video calls with them."