He was stopped on his tracks as he desperately attempted to board a Nigeria bound flight to escape from the agents who were hot on his trail. 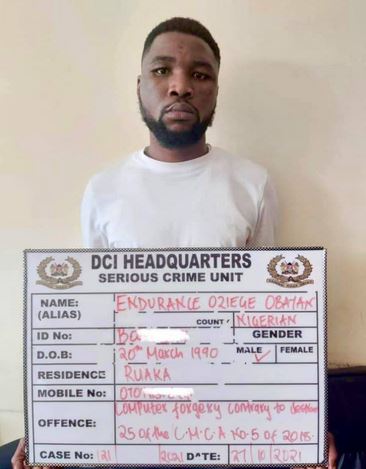 Detectives at the Jomo Kenyatta International Airport have apprehended a 31-year-old Nigerian who allegedly attempted to dupe a nut processing company of Sh35.9 Million as he attempted to escape Kenya on Wednesday, October 27.

The suspect, Endurance Obayan was stopped on his tracks as he desperately attempted to board a Nigeria bound flight, to escape from our agents who were hot on his trail.

A statement by the Directorate of Criminal Investigations (DCI) on Thursday said that Obayan had gained access to the Equatorial Nuts Processing Limited systems based in the city and sent a fake invoice to their client in Australia, demanding payment of Sh35.9 million.

"The email further instructed the client to channel the money to an account in China. This alarmed the client who immediately contacted Equatorial Nuts, in a bid to establish whether they had changed their bank details," the statement read.

"The company’s security manager immediately alerted Cybercrime detectives, who backed up by their Serious Crimes counterparts launched a manhunt for the suspect, Endurance Obayan

"Yesterday afternoon, when the suspect sensed that his hour of arrest was nigh, he hurriedly left his Ruaka apartment headed for the country’s international gateway. He was to catch an Ethiopian airlines flight scheduled for Nigeria, only to be met by mean looking sleuths and immigration officials at the airport, who whisked him to the comfort of our hatchbacks that delivered him at DCI headquarters for questioning

"The suspect was arraigned today at the Milimani law courts where he was charged with the offenses of Computer forgery contrary to section 25(1) of the computer misuse and cyber crimes act and attempted stealing contrary to section 268(1) as read with section 391 of the penal code."