His use of a Falcon 7X jet followed the ongoing repairs to Nigeria Air Force 1, a Boeing Business Jet (Boeing 737-700) 5N-FGT in Germany. 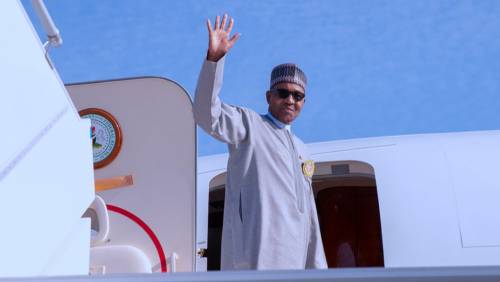 Nigeria's number own man, President Muhammadu Buhari has departed Saudi Arabia for Abuja, after participating in the investment conference organised by the Future Investment Initiative Institute, according to SaharaReporters.

The President was also in Madinah and Makkah to perform the lesser Hajj.

SaharaReporters gathered that the presidential aircraft conveying the president and some members of his entourage, a Falcon 7X jet with registration number 5N-FGV took off from the King Abdul Aziz International Airport in Jeddah, Saudi Arabia at 3.53+03 pm (1:53 pm Nigerian time).

He is expected to arrive in Nigeria later in the day.

His use of a Falcon 7X jet followed the ongoing repairs to Nigeria Air Force 1, a Boeing Business Jet (Boeing 737-700) 5N-FGT in Germany.

SaharaReporters had reported that Buhari and the delegation that travelled with him to the United States in September had escaped an air mishap after the presidential jet developed a fault while they were returning to Nigeria.

Sources said the aircraft was later taken to Euro Airport in Germany on September 29 and arrived at 4.15 pm after leaving the Nnamdi Azikiwe International Airport at 9.48 am, with the Nigerian government paying €5,000 (Euros) (N2,385,000 at the official rate of N477 to €1) per night as parking fee.

To avoid backlash, SaharaReporters gathered that the registration of the 5N-FGT aircraft was done using AMACGND.

“The Presidential Boeing Business Jet registration number 5N-FGT developed a fault during his trip from New York. He travelled to Saudi Arabia with a smaller jet. A Falcon 7X jet with registration number 5N-FGV. No picture of his departure to Saudi Arabia was released to avoid the public knowing about the jet he travelled with,” a presidential source had told SaharaReporters.

“The one that developed fault has been moved to EuroAirport Basel Mulhouse Freiburg, Germany for repairs since September. It is registered and operated under another name AMACGND. They intentionally hid it and parked it under another name because it cost €5,000 (Euros) for parking per night.”

Despite promising to cut waste, the Buhari-led government has spent at least N41 billion on the presidential fleet.

After taking office on May 29, 2015, the 2016 Appropriation Act signed by the President allocated N3.652 billion for the upkeep of the presidential fleet.

By comparison, the 2015 budget, which was in effect upon Buhari’s inauguration, earmarked N5.19 billion for the presidential fleet. The appropriation for the Presidential Air Fleet in 2021 indicates a 243.6 per cent increase from the allocation six years prior.