An official statement by the club announced the sack of the manager on Monday. 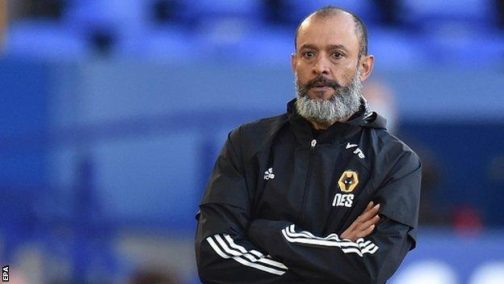 Santo
Tottenham coach, Nuno Espirito Santo has been sacked by the club.
His sack comes just four months after he was appointed.
An official statement by the club announced the sack today.
“The Club can today announce that Nuno Espírito Santo and his coaching staff Ian Cathro, Rui Barbosa and Antonio Dias have been relieved of their duties”.
Fabio Paratici, Managing Director, Football, said: “I know how much Nuno and his coaching staff wanted to succeed and I regret that we have had to take this decision.
“Nuno is a true gentleman and will always be welcome here. We should like to thank him and his coaching staff and wish them well for the future.”
“A further coaching update will follow in due course”, the club said.
Tottenham’s depressing 0-3 loss to Manchester United on Saturday proved a fatal blow to Nuno’s hopes of staying in charge.
Prior to the match, chairman Daniel Levy and other key figures had never discussed Nuno’s dismissal despite the club’s mediocre start to the campaign.
Top Stories