The image showed the 95-year-old monarch wearing a headscarf and sunglasses at the wheel of her car. 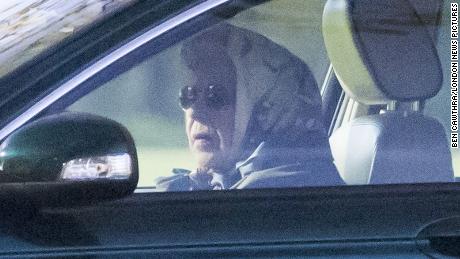 Queen spotted driving
Just few days after being instructed by her doctor to rest, Queen Elizabeth II has been spotted driving herself.
She was seen driving herself around her Windsor estate on Monday, according to CNN.
The image showed the 95-year-old monarch wearing a headscarf and sunglasses at the wheel of her car.
The outing will likely be a welcome sight amid increasing concerns over her health.
Last month, the Queen was forced to cancel a trip to Northern Ireland and spent a night at the King Edward VII hospital in central London, where doctors did "preliminary tests" and advised her to rest for a few days.
At the time, a source close to the palace told CNN that her overnight stay in the hospital was "not Covid-related."
On Friday, Buckingham Palace said the Queen had been advised to rest for two more weeks, adding that she was undertaking "light duties" at Windsor.
"Her Majesty's doctors have advised that she should continue to rest for at least the next two weeks," the palace said in a statement, adding: "The doctors have advised that Her Majesty can continue to undertake light, desk-based duties during this time, including some virtual audiences, but not to undertake any official visits."
The Queen's break from royal engagements means she will no longer attend a reception she was due to host to mark the opening of the United Nations Climate change summit COP26, which got underway in Scotland on Monday.
Instead, she will be represented by other members of the royal family— Prince Charles, Camilla, Duchess of Cornwall, as well as the Duke and Duchess of Cambridge.
Top Stories