Senator Olujimi, who represents Ekiti South at the National Assembly, hinted DAILY POST after the 2021 PDP national convention in Abuja. 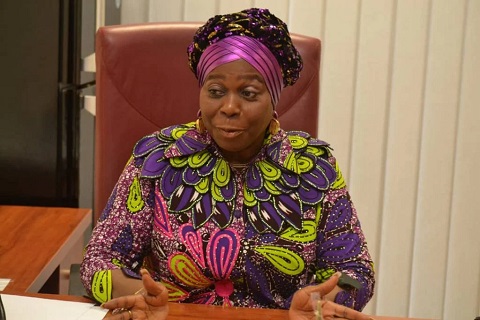 Senator Olujimi
The Peoples Democratic Party (PDP) will claim three more states in the South West on or before the 2023 general electons, Senator Biodun Olujimi has boasted.
Senator Olujimi, who represents Ekiti South at the National Assembly, hinted DAILY POST after the 2021 PDP national convention in Abuja.
PDP in the southwest has been enmeshed with internal crisis which culminated in an unresolved tussle between former military Governor of Osun State, Col. Olagunsoye Oyinlola, and a former House of Representatives member from Oyo State, Hon. Taofek Arapaja, for the position of National Deputy Chairmanship at the Saturday convention.
All efforts by the only PDP Governor from the region, Mr. Seyi Makinde of Oyo State and other stakeholders to also unite the umbrella family aftermath of the Zonal Convention early this year, proved abortive.
But Senator Olujimi, one of the principal actors in the affairs of the party in the region, and Minority Leader of the 8th Nigerian Senate, argued that too much intelligence was responsible for the crisis in the region, expressing disappointment that the only Governor from the region was not being respected.
“The problem of the South West is that, we have too many educated people and we have too many people who are extremely intelligent, and you know when you have intelligent people, you will definitely must have problems and they don’t find it necessary to line up behind their only Governor in the zone and that is a thing that hunts all of us.
“Because we have been in that situation before and we lined up behind the only known Governor we had in the zone. I believe after this convention, we will be able to throw everything down again on the table.
“What has happened to us is what happens to people that know too much and do not believe in God, because when you believe in God, you must know that all these things will come to an end one day.
“So, I believe going forward, the South West, the Governor will have to be the father and forget everything that has been done to him, and bring us all back together”, she said.
Speaking further on what to do to capture more states for PDP in the region, Senator Olujimi, who chaired the protocol subcommittee of the national convention, said the leaders of the party would need to mend more fences and kill the “cobra” that is inhabiting the cracked walls.
She said, “fences are really many, I don’t lie to myself. Some of them, we have snakes and cobras living in them and you know before you mend such fences, you must first kill the cobra and the black mamba and the scorpions and then you can now mend fences.
“But I know that God, being with us, will be able to also forge the unity that the North has shown us, that, that zone is formidable enough to be able to say go and sit down, this is where we are going and everyone will go there and that’s the way to go in Nigeria.
“We should be able to balance issues, we should be able to balance power and except we balance power, we won’t be able to move forward. I believe we will be able to work as a team if we keep working, it is work in progress.
“We are expecting that we will do very well. At least, we are expecting 3 additional states to be won for PDP in South West”.
Top Stories