Recall that Kanu is currently standing trial at the Federal High Court, Abuja, on treason, terrorism and other offences. 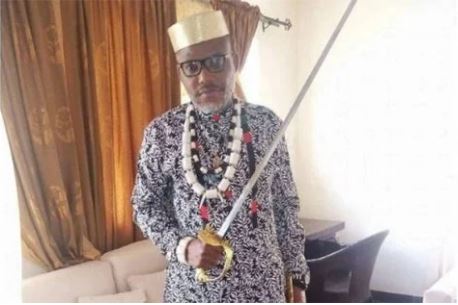 Nnamdi Kanu
The release of Nnamdi Kanu, leader of the Indigenous People of Biafra is imminent according to the youth wing of apex Igbo socio-cultural organization, Ohanaeze Ndigbo.
Recall that the pro-Biafra activist is currently standing trial at the Federal High Court, Abuja, on treason, terrorism and other offences.
Despite his detention in the custody of the DSS, political stakeholders and traditional rulers have called on the Muhammadu Buhari-led federal government to released the IPOB leader.
Governors from the Southeast region had recently disclosed that they would meet with the president to ask for a political solution to the issues involving Kanu and the region.
In a statement on Monday the President-General of the Ohanaeze Ndigbo Youth Council Worldwide, Mazi Okwu Nnabuike, commended the Southeast governors for lending their voices to the call for Nnamdi Kanu’s release.
According to Ohanaeze youth wing, only a political solution and not force would restore peace to the trouble southeast region.
“We have said it repeatedly that issues like this can never be resolved by throwing tantrums around or causing a situation of anarchy,” the group said.
“This is not the first time Ndigbo are passing this route and it was only through a political solution that the matter was resolved. We know that this one will not be an exception.
“The National Assembly caucus has also before now started the same process and now that governors have joined them, we are upbeat that the process would be fastened and Kanu released as quickly as possible.
“We thank the governors in a very special way, as well as the religious and traditional leaders in Igboland for the role they are playing. In a similar manner, we also appreciate the members of the Ohanaeze Youths in the UK and Asia, and other diaspora communities for toeing the path of peace.
“At this point, the governors and the NASS members should meet Buhari and make the singular demand for the unconditional release of Kanu and other prisoners of conscience across the detention facilities in Igbo land.”
Top Stories