Ikoyi Collapsed Building Subscribers Signed Over $500,000 Contract Each to Own Apartments


The report stated that the subscribers paid the money for the purchase of luxury apartments in the high-rise from Fourscore Heights Limited, which later collapsed. 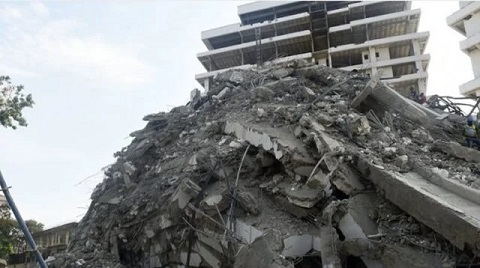 Nigerians who paid to own apartments at the collapsed 21-storey building signed contracts ranging from over $500,000 (N206.5m) to over $3m (N1.24bn), a report by Punch has revealed.
The report stated that the subscribers paid the money for the purchase of luxury apartments in the high-rise from Fourscore Heights Limited, which later collapsed.
Punch said documents it obtained showed that after the payment of an initial deposit, most of the subscribers signed an agreement to pay the balance over a period of 48 months.
In an interview with The PUNCH, subscribers said the management of Fourscore Heights Limited made the payment plan so flexible such that intending apartment owners could pay their balance through instalment payments over a period of 48 months.
The instalments, according to them, are expected to be made either monthly, quarterly, bi-annually, or yearly, depending on the choice of the subscribers.
They also revealed that the luxury apartments on the high-rise went for various prices, with subscribers to the apartments on the upper floors paying more than those on the lower floors.
One of the subscribers, who chose to speak on condition of anonymity, said, “The higher the floor your apartment is located, the higher the price. Those on the higher floors paid more than those of us on the lower floors. I subscribed for a three-bedroom apartment on one of the floors below the eighth floor which went for $650,000. However, the owner of Fourscore Heights Limited, Mr Femi Osibana, reduced the price for some persons who were close to him. I happened to be one of those fellows. Femi and I were childhood friends.
“So, he also reduced my price to $565,000. We were together in Mayflower School in Ikene, Ogun State. We were also together at some points in London when he used to travel to Italy to buy suits and shoes for sale in the United Kingdom. Subscribers on my category were asked to pay only the initial deposit of $65,000 and then spread the remaining $500,000 over a 48-month period.
“I was told subscribers on the 12th floor and above signed agreements to pay over $1.2m over a 48-month period while those on the 17th floor and above were asked to sign agreements to pay over $3m and above, depending on terms of the negotiation and agreement.”
A subscriber, who told our correspondent that he was given an apartment on the fifth floor, said he planned to pay a monthly instalment of $10,416 (N4,301,808) over a period of 48 months, following an agreement to pay $65,000 (N26,845,000) as initial deposit.
According to him, the total package was $565,000 (N233,345,000) and it was meant to be paid over a four-year period, after the payment of the initial deposit of $65,000.
A copy of the subscriber’s letter, which was obtained by our correspondent, showed that aside from the luxury apartments, the 21-storey building also contained several facilities to be enjoyed by the intending owners, including a power generating plant, club house, swimming pool, communal offices, gym and spa, 24-hour security, servant’s quarter and parking space.
The package also included legal and agency fees, which were not disclosed in the offer letter.
The letter, which was on the letterhead of Fourscore Heights Limited, has the address of the company as 2-4 Mosley Road, Ikoyi, Lagos.
It read in part, “We are pleased to offer for sale three bedroom Finished Flat on 5th floor Peace Building for the sum of USD 565,000.00 (five hundred and sixty  five thousand dollars only), situated at 44bcd Gerrard Road as described above, under the following terms and conditions subject to contract viz details of development: three bedrooms (all en suite), one bedroom servant’s quarter, kitchen, parking space, generating plant, 24-hour security, access to club house, swimming pool, communal offices, gym and spa.
“Purpose: Strictly residential. Title: Deed of sublease. Payment terms: 1st payment -$5,000; 2nd payment – $60,000; Balance payment – (this will be spread over the period of four (4) years. Legal fees: five per cent. Agency fees: five per cent. All payments should be made in favour of O. Osibona/Fourscore Heights Limited.”
The letter also showed that subscribers were to make payments in dollars into the company’s domiciliary account, which was provided in the letter.
Efforts to get Fourscore Heights Limited to react to the development failed.
Calls were made to the official lines of the company indicated the lines were switched off. Text messages sent to the lines were also not replied to as of the time of filing this report.
Top Stories