Akpata had at a media parley last Thursday intimated the press that with the approval of the National Executive Committee (NEC), the NBA has set up a high-powered committee. 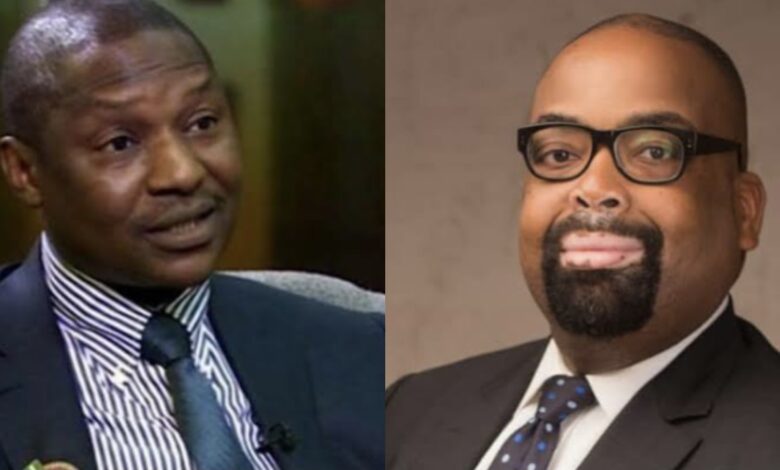 Malami and Akpata
An accusation has been made against Mr Olumide Akpata, President of the Nigerian Bar Association (NBA) over his decision to unravel the real faces behind the invasion of the home of Justice Mary Peter-Odili’s residence in Abuja.
The accusation came from Abubakar Malami (SAN), Attorney-General of the Federation and Minister of Justice who said Akpata is pursuing a personal agenda.
Despite the report of the investigation by the Inspector General of Police (IGP), Usman Baba Alkali, Akpata had at a media parley last Thursday intimated the press that with the approval of the National Executive Committee (NEC), the NBA has set up a high-powered committee to investigate the circumstances surrounding the attack on Justice Odili, and report to the NBA on a weekly basis.
He said the NBA would ensure that all those behind the embarrassing incident are unveiled and made to face the stiff sanctions of the Association, including legal action.
“It is for this and other reasons that I have appointed the Chairman of the NBA Section on Public Interest and Development Law (NBA-SPIDEL), Dr Monday Ubani, to serve as the NBA’s Special Investigator to inter alia, unmask those behind the attack on Justice Odili’s home, and to ensure that these individuals are made to face the law.
‘It is for this reason that we are calling on President Muhammadu Buhari, to immediately set up an independent Panel of Inquiry to fish out all those that are behind this dastardly act” Akpata had said.
But speaking on Channels Television programme, Sunday Politics monitored by DAILY INDEPENDENT, Malami who denied any culpability in the invasion of the residence of the Supreme Court justice said the NBA president is pursuing a personal agenda on the matter.
“I think the NBA is perhaps having an agenda. I am talking of the national president of the NBA. Perhaps maybe he may have his own agenda that he is pursuing, either arising from certain conspiracies or not”.
“But then, if he feels strongly about the report which has been formally released by the office of the Inspector General of Police, he knows how best it can be set aside both in terms of authenticity, in terms of cogency and in terms of veracity”.
Top Stories