#EndSARS: Buhari, Buratai Will Be Dragged to ICC for Killing Nigerians – Reno Omokri


Reno said the president will end up in jail after the expiration of his tenure in 2023, stressing that Buhari will not quit Aso Rock in peace. 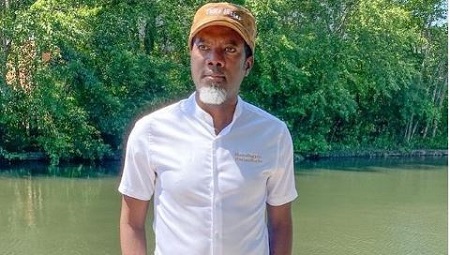 Reno Omokri
Former presidential aide, Reno Omokri has continued to attack President Muhammadu Buhari accusing him of killing innocent Nigerians at Lekki Tollgate, Lagos State on October 20, 2020.
According to Omokri, Buhari will end up in jail at the expiration of his tenure over the Lekki tollgate massacre, alongside his former army chief, Tukur Buratai.
This comes after the Panel of Investigation set up by the Lagos State Government to unravel the Lekki Toll Gate incident revealed that police and officers of the Nigerian Army intentionally killed and maimed armless youths protesting the extrajudicial killings by the Nigerian police.
Major General Taiwo, who appeared before the panel during the investigation, according to the report, had told the panel that the soldiers acted on the order of Buratai, who in turn got instruction from the Commander-in-Chief, President Buhari.
Reacting, Reno, a socio-political activist said the president will end up in jail after the expiration of his tenure in 2023, stressing that Buhari will not quit Aso Rock in peace.
In a post on his verified Facebook page, Reno accused President Buhari of masterminding the Lekki massacre.
The post reads, “Buhari, you see what you are doing to Nnamdi Kanu and Igboho now? That is precisely what we, the people of Nigeria will do to you and the potbellied Buratai, at the International Criminal Court – ICC after 2023, when your ignoble tenure ends, God willing!
“You will not retire in peace to Daura. Rather, you will retire in pieces to prison to pay the price for the killings of unarmed, peaceful, #EndSARS protesters during #LekkiMassacre.
“To prove that Buhari personally ordered the #LekkiMassacre, just rewatch his June 10, 2021 AriseTV interview, where he accused #EndSARS protesters of wanting to “remove me”. Buhari killed them out of self interest!
“Your own son had an accident and we all sympathised with you and prayed for his recovery. Only for you to go and kill other people’s children! Until then, we will #HarassBuhariOutofLondon, #HarassBuhariOutofNewYork, #HarassBuhariOutofParis, and #HarassBuhariOutof anywhere you go for medical tourism, except Saudi Arabia.
“As you called Igbo people a dot in a circle, so will we encircle you and make you feel what it is like to be a useless dot.”
Top Stories