Unfortunately, that part has been converted to a haven for hoodlums, criminals and brigands. They brazenly dry their rags and clothes outside the dilapidated building. 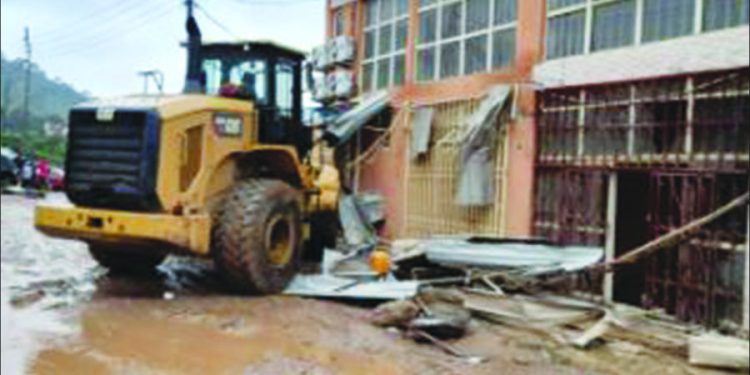 Sun News reports that some time early this year, the Federal Capital Development Administration (FCDA), destroyed a filling station under construction along the Abuja-Keffi Expressway. It was only the front-view that was demolished.

The rest of the building was left standing.

Unfortunately, that part has been converted to a haven for hoodlums, criminals and brigands. They brazenly dry their rags and clothes outside the dilapidated building.

In the day, the place is calm and quiet. But in the night it is risky and deadly for both passers-by and motorists. They do not mind the closeness of the spot to a military barracks.

Abuja-Keffi Expressway is reputed for constant gridlocks. The men of the underworld capitalise on the gridlock to rob their victims and escape through a nearby bush-path.

One of the victims, Mr Buba Sunday, narrated to Daily Sun: “On that day, there was a serious gridlock following a trailer that spoilt on the road. Every vehicle was almost on one spot. My family was worried because they had heard of the gridlock.

“They wanted to know where I was. As I was still communicating with them, a figure just appeared and attempted to snatch my phone. I shouted, he jumped onto the other side of the road and escaped into the bush.”

Another victim, Mrs Eliena Ezekiel, left office about 7 pm that day because of some reconciliation she was doing:

“I left office late that day. The traffic was much, so I wound down my glasses. Unsuspecting any untoward circumstances, a man came, put his hand on the dashboard where I kept my phone and walked away. I was so scared to shout because I was the only person in the car.”

Mrs Peju John said that she had a flat tyre on that spot: “After work that day, at 6pm, I got to that spot about 7 pm or thereabout. My tyre suddenly went flat. While I was still contemplating on what to do, two men walked in to render help. I was relieved because at that point I was confused.

“I accepted their offer to help. After fixing the tyres I gave them N2000 and left. But on the way, I discovered that my money and phone were missing.”

The FCDA had demolished the filling station not only because of its proximity to the major road but because it was dangerously located on a hill.

This could cave in and cause a serious damage.

So far, there are over 58 filling stations along that corridor.