The baby was taken from her daughter by a strange man who lured her into an uncompleted building. 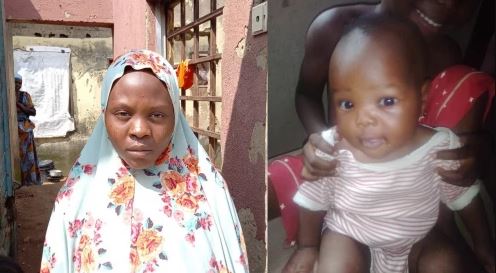 Fatimah Kabiru and her missing baby

A 23-year-old woman, Fatimah Kabiru whose baby was abducted by an unknown man has been left traumatised as she calls for help in getting back her child.

The mother-of-three was doing laundry when the incident occurred on Monday, November 8, 2021, around 10:00 am in Dakwa community near Dei-Dei under Bwari Area Council of the Federal Capital Territory (FCT), Abuja.

The 3-month-old baby started crying while Fatimah was doing laundry, so she asked her first daughter, Mariam, 5, to take her outside to play with her.

While playing with her baby sister, a man lured Mariam and the baby out of the compound by promising to buy them juice.

After waiting for a long time for the man to return with her sister and the juice, Mariam returned home, crying, and narrated to her mother what had happened.

At this point, the mother raised an alarm and rushed to the said uncompleted building in search of the man but there was no sign of him.

The traumatised mother reported the matter at Dakwa Police Station, located a few meters away from the scene of the incident, but was told to come back and report if the baby was not found after 48 hours.

It's been over one week and the child still hasn't been found.

The father of the baby, Kabiru Musa, a staff member of the Federal Road Safety Commission (FRSC), was away in Imo State for training when the incident occurred.