IPOB alerted people of the two regions to be cautious and security conscious, at these periods adding that the herdsmen would disguise as unknown gunmen to unleash terror on unsuspecting people. 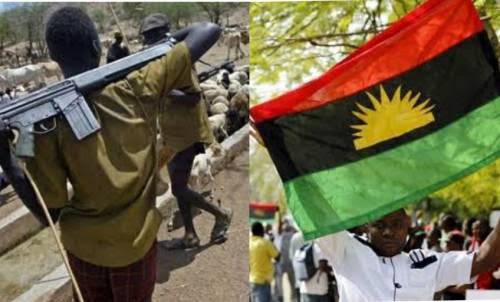 Popular secessionist group, the Indigenous People of Biafra, IPOB, has alleged that Fulani herdsmen are planning to attack South-East and South-South regions during the festive periods.

IPOB alerted people of the two regions to be cautious and security conscious, at these periods adding that the herdsmen would disguise as unknown gunmen to unleash terror on unsuspecting people.

The group vowed that its security arm, Eastern Security Network, ESN, would be vigilant to secure lives and property as well.

IPOB stated this in a release by its spokesman, Emma Powerful, which was obtained by SaharaReporters on Saturday.

"Following the incessant killing in our territory by unknown gunmen, we the great movement and family of the Indigenous People of Biafra (IPOB) wish to remind Biafrans and the whole world that unknown gunmen are a creation of Fulani cabal ruling Nigeria. They deployed terrorists, bandits and herdsmen to our territory to unleash mayhem and terror in our region.

"Intelligence reports at our disposal indicate that the hypocritical Department of State Services, DSS, has mobilised more jihadists to dress as unknown gunmen in South-East and South-South regions and unleash more mayhem on the innocent people and residents of the regions.

"We therefore raise this alarm so that our people will be very careful this festive period because DSS has perfected arrangements to unleash mayhem and catastrophe in Biafra land.

"What they could not achieve during the Anambra election, they are desperate to achieve now but they will still fail. They want to make Biafra land as insecure as North East and North West but IPOB has always been their obstacle.

"IPOB intelligence unit is working day and night to expose these vampires who derive joy in sucking blood of innocent citizens and we are ready to repel Fulani terrorists in any form they come. Biafra land can never be conquered by the Fulani jihadists.

"We therefore want Biafrans to note that those currently terrorising our people under the guise of unknown gunmen are Fulani sponsored terrorists. ESN has no hand whatsoever in the ongoing secret genocide in our land. Our enemies are the masterminds.’

The Biafra group, therefore, informed residents that, "To this end, Biafrans are now directed to hunt down and lynch any unknown gunmen seen operating in any part of Biafra land."