Led in evidence by the EFCC lawyer, Rotimi Jacobs, Tolulope informed the court that Agbele bought four charlets from her company, Still Earth Limited, between March and July, 2015. 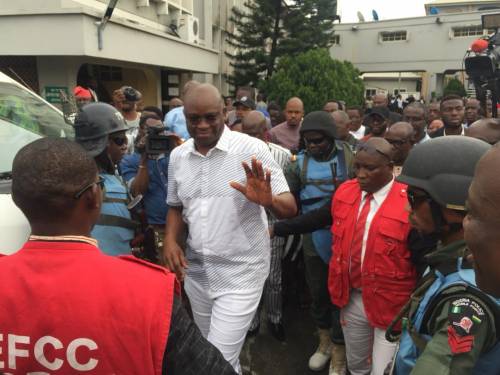 Joanne Tolulope, a prosecution witness, in the trial of former Ekiti State Governor, Ayodele Fayose, has informed a Federal High Court sitting in Lagos State, how an associate of the ex-governor, Abiodun Agbele, bought properties worth N1.3 billion within four months.

Tolulope, who is the eleventh prosecution witness, testified before Justice Chukwujekwu Aneke on Wednesday in the trial of the former governor over an alleged fraud of N6.9billion filed against him by the Economic and Financial Crimes Commission (EFCC).

Led in evidence by the EFCC lawyer, Rotimi Jacobs, Tolulope informed the court that Agbele bought four charlets from her company, Still Earth Limited, between March and July, 2015.

The witness, who is an in-house counsel for Still Earth Limited stated that the company deals in real estate and also renovates properties to meet the needs and expected standard of their clients.

In her testimony, she stated that sometimes between March and July 2015 that Agbele contacted the company a phone call and requested if there were properties available for sale.

"Incidentally, we had properties for sale. We discussed about Mr. Agbele's availability to come for inspection. He came sometime in March 2015 to inspect the property and requested for two charlets of 3-bedroom and 4-bedroom respectively and paid N575 million and some fractions for the property.

"Again, in July 2015 he (Agbele) approached us and bought charlets 6 and 9 for N573million and some figures. He also approached us to register the Deed of Assignment in the name of JJ Technical Services,” she said.

An attempt by the EFCC lawyer, Rotimi Jacobs (SAN) to tender the Deed of Assignment as exhibit was resisted by defence lawyer, Ola Olanipekun, (SAN) who raised objection as to the admissibility of the document.

Following the objection, counsel to EFCC informed the court that he would withdraw the document but would tender it later during trial.

The witness further informed the court that the sum of N800million was deposited by De Privateer Limited into account of Still Earth Ltd, and a cash lodgement of N209million from one Taofeek on the instructions of Abiodun Agbele.

The judge adjourned to Thursday for continuation of trial.

He was first arraigned on October 22, 2018, before Justice Mojisola Olatoregun, alongside his company, Spotless Investment Ltd, on 11 counts bordering on fraud and money laundering offences.

He pleaded not guilty to the charges and was granted bail on October 24, 2018, in the sum of N50million, with sureties in like sum.

The defendant was subsequently, re-arraigned before Justice Chukwujekwu Aneke, on July 2, 2019, after the case was withdrawn from Mrs Olatoregun, following EFCC’s petition.

He also pleaded not guilty to the charges and was allowed to continue on the earlier bail granted, while the case was adjourned for trial.

The commission has since opened its case, and is still leading witnesses in evidence.

Fayose was alleged to have received a cash payment of the sum of five million dollars, (about N1.8 billion) from the then Minister of State for Defence, Sen. Musiliu Obanikoro, without going through any financial institution.

Fayose was alleged to have procured De Privateer Ltd and Still Earth Ltd,  to retain the aggregate sums of N851million which they reasonably ought to have known formed part of crime proceeds.

Besides, the defendant was alleged to have used the aggregate sums of about N1.6 billion to acquire properties in Lagos and Abuja.