Drama As Bride Faints On Groom, Vomits, Then Gets Defecated On During Wedding Vows


Though the day started well, a sudden bout of sickness caused her to swoon into her concerned hubby’s arms during their vows. 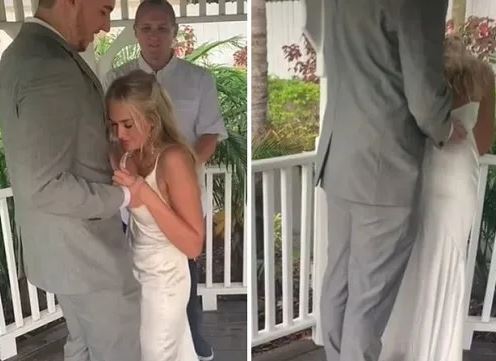 A bride fainted on the groom while taking her vows before her nephew defecated on her wedding gown while she was vomiting.

Hollee Lynnea-Kolenda Darnell, 22, who is from the US city of Minneapolis, Minnesota, got hitched recently to new hubby, Jackson, at a ceremony in Florida.

Though the day started well, a sudden bout of sickness caused her to swoon into her concerned hubby’s arms during their vows.

Her worried sweetheart can be heard asking whether she is okay as she comes back around.

Hollee – dressed in a flowing, white bridal gown – shakes her head and stumbles over to the edge of the gazebo, and vomits over the side.

In the clip, which has since gone viral, her caption read: “I kept trying to tell my husband I didn’t feel good and he thought I was joking.”

The footage ended there, but the bride said there was still more bad wedding luck to come.

In the caption she wrote: “My baby nephew pooped on my dress right after while I was puking.”

Hollee later explained the reason for the sudden sickness.

In a follow-up video she said she hadn’t eaten or drunk enough water during her big day, leaving her “really dehydrated”.

She added: “It was also Florida, and it was so hot and humid that day.

“We were drenched, it was so hot.

“I’m also prone to passing out, my doctor says I have low blood pressure and low iron. I guess I was just doomed from the start.”