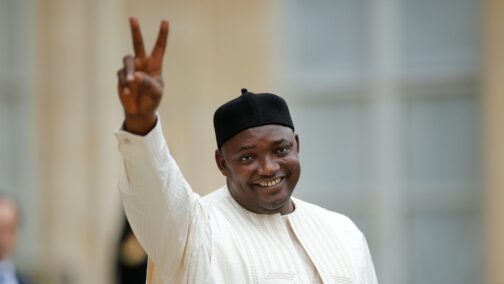 Adama Barrow
President Adama Barrow has been re-elected for another term.
This comes after he was declared winner of the Presidential election held in The Gambia on Saturday.
He has now won a re-election for a second term.
The president won 53 percent of the votes cast on Saturday, while Ousainou Darboe, his closest rival polled 28 percent of the votes.
Supporters of Barrow and members of the National People’s Party, NPP celebrated wildly at McCarthy Square immediately the results were announced.
Deputy spokesman, NPP, Seedy Njie in a statement said “The National People’s Party, partner parties and Independents wish to inform all members and supporters of our grand alliance that His Excellency the President of the Republic, Secretary General and Party Leader of the NPP Mr Adama Barrow will deliver a victory speech today Sunday 5th December, at the McCarthy Square in Banjul.
“All supporters and members of our grand alliance are urged to be in Banjul. President Adama Barrow and team are grateful to all Gambians for the trust and confidence they have in him.”
But three opposition candidates have rejected the partial results citing an unusual delay in tallying the votes.
They are Ousainou Darboe, Mama Kandeh and Essa Mbye Faal.
Saturday’s vote was the first in 27 years without disgraced former President Yahya Jammeh, who lives in exile in Equatorial Guinea after refusing to accept defeat to Barrow in 2016.
Jammeh, whose 22-year rule was characterised by killings and torture of political opponents, had tried to persuade supporters to vote for an opposition coalition in telephoned speeches that were relayed to campaign rallies.
Top Stories