The operation was conducted after Intelligence, Surveillance and Reconnaissance (ISR) missions revealed the presence of several fighters in the area. 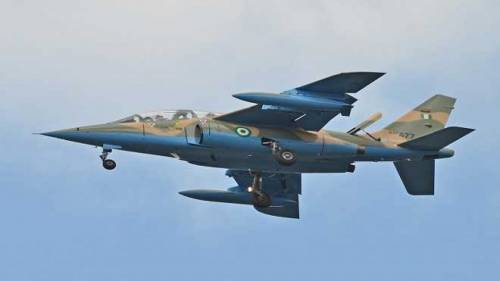 The Nigerian military has confirmed the killing of a notorious ISWAP commander, Abou Sufyan in Lake Chad.
Sufyan and scores of other ISWAP fighters were killed following coordinated airstrike by the military along the fringes of Lake Chad in Borno state.
PRNigeria gathered that the strikes from the Nigerian Air Force (NAF) component of the Operation Hadin Kai launched a series of attacks on Sunday at ISWAP armoury base at Kusuma and Sigir in Marte Local Government Area of Borno State.
The operation was conducted after Intelligence, Surveillance and Reconnaissance (ISR) missions revealed the presence of several fighters who converged on the area in their preparatory move to launch attacks on troops in the axis.
An intelligence source told PRNigeria that: “The ATF scrambled super Tucano aircraft in attacking the target area in multiple waves which recorded direct hits on a weapon-manufacturing facility, fuel dump, armoury base and an infrastructure filled with vehicles and motorcycles.
“Some terrorists fleeing the area were also intercepted and neutralised in follow-up attacks by the Nigerian troops.
“The week-long sustained air offensives have impacted on jihadists operational command and thwarted the group’s plans to carry out major attacks on the military formations in the axis.
“We are aware that some of the surviving and wounded terrorists who escape are hiding under thick trees around Arinna Sorro and Arinna Ciki.”
Top Stories