Although, the 21-year-old mother of the child is yet to reveal which of the men fathered the child the two men are still fighting. 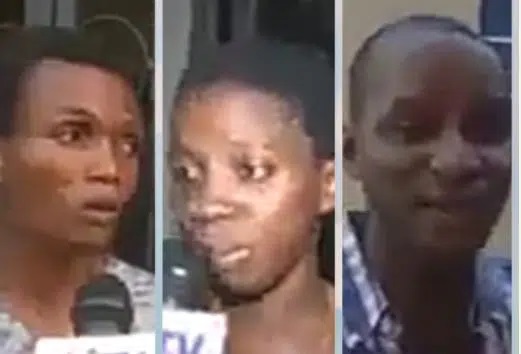 The fighting trio
A young lady has been caught in the middle of a fight between two men claiming ownership of her baby.
The men identified as Junior Ajayi, 24, and Amadi Idahosa, 35 both living in Benin City claimed that they are the father of the child given birth to by the lady identified as Blessing.
It was gathered that one of them took care of the girl until she gave birth while the other suddenly surfaced a few months after the woman delivered her baby.
The 21-year-old mother of the child said the father of the child is Amadi.
Ajayi in an interview with newsmen noted that he was the one who took care of the 21-year-old lady from the inception of the pregnancy until she gave birth, adding that he had gone to meet the family of the lady and was accepted as their own.
Amadi who is a married man without a child with his present wife refuted Ajayi’s claims.
He revealed that he fathered the child but was not present at the birth due to the nature of his work.
He said, he ensured that the mother and child were well taken care of as he sends money to them as often he could.
Watch the video below:
Top Stories