How Police Unjustly Arrested, Detained Me With No Food, Water In Osun — Activist Alleges Police Brutality


He alleged that the policemen from Dugbe Police Station in Osogbo are responsible for his humiliation and molestation, adding that they also demanded a bribe of N50,000 each from 12 of them who were picked up. 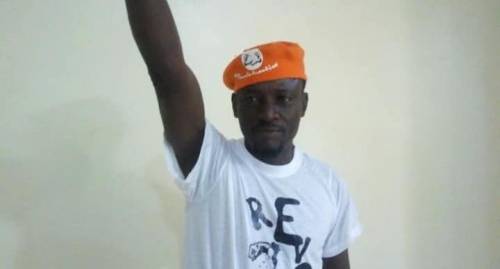 Mr Samson Tola, a member of the Take It Back Movement, has said he was brutalised and humiliated by the men of Osun State Police Command, according to SaharaReporters.

Tola said he was unjustly arrested, battered and detained for no reason. He also accused the policemen of not carrying out any investigation or questioning before he was charged to court with other innocent people.

He said the ugly experience started on November 15 around the Olaiya area of Osogbo, the Osun state capital.

He alleged that the policemen from Dugbe Police Station in Osogbo are responsible for his humiliation and molestation, adding that they also demanded a bribe of N50,000 each from 12 of them who were picked up.

Tola narrated his experience to SaharaReporters on Thursday, adding that police brutality persists in Nigeria.

“On Monday, November 15, I returned from a trip to my hometown where I was working on a small project. I got to Osogbo around 3:30 pm. And then, I changed to go and see a friend who just had a baby.

“I left my wife’s shop and went straight to my friend’s place. While coming back around 7:45 pm, I started hearing gunshots around the Olaiya area. I saw it was the police so I continued my journey since I had no skeleton in my cupboard.

“To my greatest surprise, one of the men working with the police, a vigilante officer who was dressed in mufti, covered his face with a mask, approached and hit me with the edge of an axe on my right elbow. I said what is happening. Am I under arrest? If I am under arrest, I don't resist arrest. He slapped me again. I said you can only use minimum force on a person resisting arrest, that I am not resisting arrest, and you are still using maximum force on me,” Tola narrated.

He said he was pushed inside a minibus meant for seven passengers, with other 11 people.

“The guy got angry again, slapped me and called me names like 'criminal'. He pushed me into a 7-seater minibus where 11 guys had already been stacked. So, we became 12 people and were driven down to Dugbe police station.

“At the police station, I was not questioned, no statement, and no interrogation. They disrobed us. They collected our clothes, we were asked to pull off our boxers in the passage of the station in front of a lady officer. It was the lady officer that checked the pockets of our trousers after removing them.

“When it was my turn, the lady asked me to raise my hands so she could search my pocket but I was trying to hold my trousers, and she said ‘what do you have there that I’ve not seen before?’ I was highly embarrassed — a female officer putting her hands in my pocket when my boxers were off.

“The lady also started calling me all sorts of names. There was a man there in suit taking sides with the lady that evening, asking why was I so arrogant. He started threatening that he would make sure he dealt with me,” he added.

Tola revealed that the policemen asked for a bribe from his people, but they refused. He also said they did not allow him to eat or drink during the 18 hours he spent in detention.

“They locked us up and when I was thirsty around 10:30 pm, I called out to the lady that she should give me water. I didn’t even know that my comrades had brought food for me. But they didn’t bring the food to me because they didn’t bribe them. They denied me food and water for 18 good hours and I was on medication. They even saw my medication in my pocket.

“They asked my comrades that came to go and bring N50,000 for my bail. They told them that bail is free and I told them too that we are not going to pay a kobo. The DPO (Divisional Police Officer) now said you are proving you know (your rights) and that they would take us to court. We were in the cell till 2:45 pm the following day and were driven to court.

“On getting to court, they brought out 8 counts against us. It was there I saw the man in a jacket at the station was our prosecuting counsel. The 8 counts said we were selling Indian hemp, we were brandishing arms that we wanted to use to destroy people.

“The magistrate granted us bail with a sum of N100,000 and a surety but before we could perfect the bail conditions the court had closed and they took us back to the police station. On getting to the station, the DPO said they should drive us to Ilesha correctional centre. My experience was the part of the Nigerian police brutality,” he said.

Mr Tola, who is a house painter and paint manufacturer, said throughout his years as an artisan, he had never duped anybody or engaged in anything that would warrant his arrest.

“I have been an artisan for 34 solid years. Police have been denying police brutality but I am a victim. I have no skeleton in my cupboard. Nobody has ever taken me to a police station before over my job. I’ve delivered jobs for military officers, lawyers, bankers and so on,” Tola said.

When SaharaReporters reached out to the police spokesperson in Osun State, Yemisi Opalola, for comments, she neither answered her calls nor replied to messages sent to her mobile phone.