The right-back produced a goal and four assists in three league appearances last month to help the club stay in the title challenge. 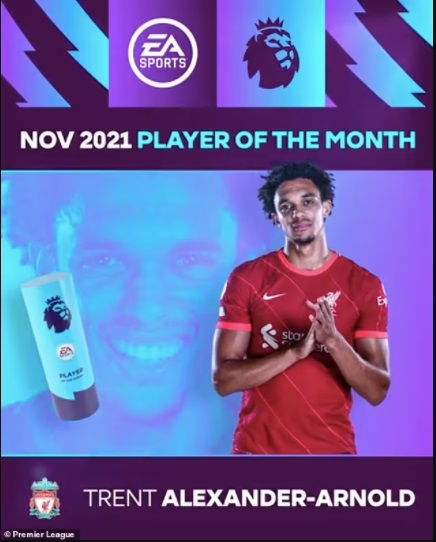 Alexander-Arnold
Liverpool star, Trent Alexander-Arnold has won the November EA Sports Premier League Player of the Month award.
The right-back won the award after scoring a goal and providing four assists in three league appearances last month to help the club stay in the title challenge.
Alexander-Arnold finished ahead of team-mate Diogo Jota, Manchester City duo Joao Cancelo and Bernardo Silva, Aston Villa's John McGinn, and Watford's Emmanuel Dennis to clinch the monthly award.
He started the month with a stunning free-kick and an assist in Liverpool's 3-2 defeat to West Ham.
Alexander-Arnold then grabbed two assists in Liverpool's 4-0 win over Arsenal in the first match back after the November internationals and made an assist in the corner from which Virgil van Dijk netted the fourth goal against Southampton.
It's the second month in a row that a Liverpool player has claimed the Premier League prize after forward Mohamed Salah won it in October.
Top Stories