According to reports, the lady discovered her ex-boyfriend was on a path to becoming a family man, so she attended the ceremony with her friends to cause trouble. 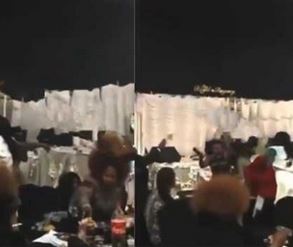 There was palpable tension as a lady stormed the wedding of her ex-boyfriend alongside her friends to create a scene at the event.

According to reports, the said ‘party crasher’ discovered her ex-boyfriend was on a path to becoming a family man, so she did the favour of attending the ceremony, coupled with her friends and joined other guests to ‘celebrate’ with the ‘new groom in town’.

Unknowing to others, she had a second agenda. In the viral video, the lady took matters personally and disrupted the events.

Momentarily, she and her friends could be seen throwing bottles while causing chaos.