Mom Narrates How Her Dog Saved Her Baby’s Life


The dog kept pushing the nursery’s door open with his head so that he could check on the little girl and his move ultimately saved her life. 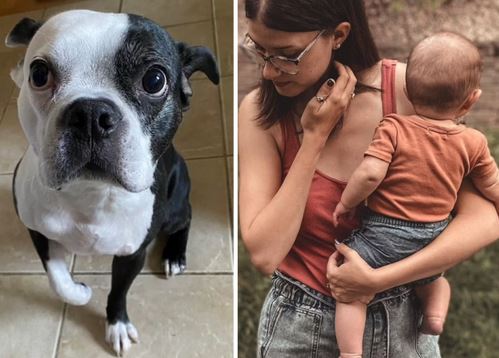 A mother has narrated how her ‘hero’ dog saved her daughter’s life by breaking into her crib when he realised she has stopped breathing and was turning blue.

Kelly Andrew, an author from Boston, explained that her young daughter wasn’t feeling well, and their Boston Terrier, Henry, was very concerned.

He kept pushing the nursery’s door open with his head so that he could check on the little girl – and his move ultimately saved her life.

The writer said she began to get ‘fed up’ with Henry’s antics, since the baby was trying to sleep and he kept waking her up. But Henry could tell something was wrong and he kept persisting.

At one point, when she went to get Henry out of the room, she noticed that the baby had stopped breathing – and was turning ‘blue.’

She and her husband, Jeff, rushed her to the hospital, where doctors were thankfully able to clear out the baby’s airways.

‘Last night the dog kept breaking into the nursery and waking the baby. She’s been sick, and I was getting so fed up with him,’ the mom-of-two explained on Twitter.

‘Until she stopped breathing. We spent the night in the hospital. I don’t know what would have happened if he hadn’t woken her. We don’t deserve dogs.’

Kelly’s moving story quickly went viral, gaining more than 27,000 retweets and 230,000 likes since it was posted earlier this week.

People quickly started to reply to her post and share stories of their own dogs being heroes.

One person wrote, ‘That’s so scary! I’m glad your baby is on the mend. One time hubs was out of town, and our dog jumped on my chest and barked in my face until I woke up.

‘The house was full of smoke – I’d left the fireplace on and the stockings were smoldering. Our dog saved our daughter and me.’

‘When we were little, my brother climbed out of his crib, down the hall, and out the front door,’ another shared. ‘My dog woke my parents up and they found him in the driveway. Dogs are amazing.’

‘Animals are amazing. When I was a kid I was sliding towards a barbed wire fence and my dog pulled me off the sled before it went through,’ a third tweet read.