She says her husband had been suicidal for a long time and was vocal about it but no one took him seriously. 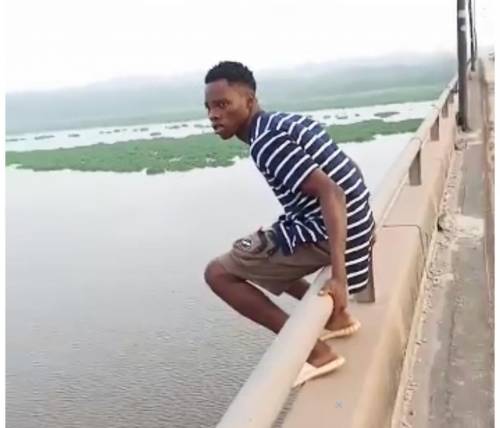 Amusa Rafiat, a young Nigerian lady, who happens to be the wife of Olalekan Odunare, a diploma holder who jumped into a lagoon at Epe in the Epe Local Government Area of Lagos State, has spoken up.

She says her husband had been suicidal for a long time and was vocal about it but no one took him seriously, according to SaharaReporters.

In a video shared online, Rafiat said Odunare's attitude had suddenly changed but there was no proper monitoring and evaluation as everyone around him thought he was under the influence of hard drugs (Colorado).

When asked if her husband used to take hard drugs, she said he only used to take Arizona. Arizona, which derives its name from a state in the United States of America, is a variant of marijuana, produced by putting the original cannabis through some chemical processes to distort its chemistry and ultimately imbue it with a stronger level of potency.

She, however, said the late Olalekan had not taken the drug for some time before he committed suicide.

She said, “My name is Amusa Rufiat from Oyo State but my parents reside here in Epe. My husband's name is Abdulrahman Odunare Olamilekan.

“He had been speaking of it (suicide) even for some days but he was not monitored properly. If he was, the case would not have been as bad as this. No one took him seriously. They all thought he was under the influence of Colorado (hard drugs), so they didn't even evaluate what he was saying. He didn't take Colorado but he used to take Arizona but it had been long he took Arizona.

“Since the incident, I have not seen anyone from my husband’s family. I have only seen people from my family and I have no friends but whatever anyone has to give will go a long way. Like what he said before he died, that I shouldn't allow his daughter to suffer. I plead with all Nigerians to help me.”

SaharaReporters had earlier shared a viral video showing Olalekan sitting on the handrail of Berger Bridge and suddenly jumping into the lagoon.

A voice in the video is heard asking Olalekan what was wrong with him, but soon after, he jumped to his death.

It was later learnt that the deceased, who left a one-year-old baby behind, had told his father, Odunare, in the early hours of Tuesday to pray for him.

“He also told his girlfriend who is 19 years old to take care of his baby.

“Thereafter, he left to (go to) the bridge side to commit suicide by jumping inside the creek, without giving any reason for such action to his family,” a source close to the family had said.

Olalekan was said to be a holder of an Ordinary National Diploma (OND) certificate and a worker at Alaro City, a mega estate along the Lekki-Epe Expressway.

“For some time now, Olalekan has been acting strangely. For more than a week, he couldn’t sleep. He just woke up yesterday (Tuesday) to say he was going. They asked him, ‘going where?’

“They tried to hold him but he overpowered the people around because he was very strong. Maybe it was a spiritual attack. But we could not ascertain that. He just woke up and said he was going and that they should pray for him.

“They held him but he overpowered them and went straight to his girlfriend’s house to tell her to take care of his child because they might not see each other again,” the family source had added.

It was learnt that one of his brothers saw the viral video and notified the family about it.

“He told their father that they should not bother looking for Lekan because he saw him on Berger Bridge as he jumped into the lagoon and he must have died,” the source had further said.

Asked why the person recording him could not save him at the scene, the family friend said, “The person that made the video was alerted by some motorists on Lekki-Epe expressway and he was walking towards him while recording but he could not catch up with him.

“The guy was far away from him. He was about to hold him when he jumped inside the river. Nobody could hold him there except somebody who can swim.”

Rescue efforts were launched thereafter and his corpse was found on Thursday, December 16.