Actress, Ngozi Ezeh Reveals Men Still Ask Her Out Despite Being Married With Grown Kids


Nollywood actress, Ngozi Ezeh who is also the ever-smiling mother of three talks about how she copes with randy men. 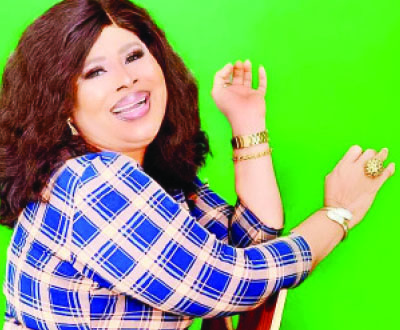 Ngozi Ezeh, the Nollywood actress, has been having her fair share of love advances from fans, as some of them kept flooding her with marriage proposals.

In this interview, the ever-smiling mother of three talks about how she copes with randy men. Excerpts:

Can you recall the year you started acting?

I started acting professionally in 2000. And then I had to withdraw a little to attend to the children, and now that they have fully grown, I had to come back.

What was your first movie?

My first movie was titled, God Where Are You?

Looking back, in terms of comparison, what would you say is different in the industry?

Back in the days, you must know a producer or be in good terms with him, and then he would have to favour you by giving you a movie role. But now, your craft is being appreciated the more, if it’s not good enough, you are going nowhere.

What differentiates the social media acting from the real Nollywood acting?

Then, the industry was centered only in the open market, but now you have different markets such as YouTube, Netflix etc., and different platforms where you can showcase your films and crafts.

What good or harm would you say social media has done to the movie industry?

Social media has helped the movie industry in mitigating copyright and piracy. Social media has brought a lot of enlightenment to Nollywood and has showcased us and our platforms; while also providing a beautiful landing for our jobs.

What project are you currently working on?

I am working on a project directed by Ebizu. My character in the movie is Madam Veronica, a matron in the hospital and she wasn’t privileged to have children. So, when the unfortunate couple that got stranded came to her to help deliver their baby, she helped quite alright,  but ended up stealing one of the twin girls delivered.

Who exactly is Ngozi Ezeh aside the one always acting the good role in movies?

I am a pleasant and easy-going woman, and I believe what is fair is fair. That’s my life. I am very straightforward; I like life when it is easy going. It costs little to do good and so much to do evil because you have a lot to contend with.

You rarely play bad character in movies, why?

I do bad character in movies too, like I did in Royal Glory and Royal Wars, among others. My look doesn’t really change anything,  but they always make me play the emotional part because they feel I can cry easily, and that my face appears emotional. I wonder from where they got that.

How do you manage both your family and acting?

The kids are grown now; they are all in the university. When you build your life on transparency, it goes a long way to help you be and do whatever you want to do in your life. If you start early to build a trustworthy relationship with honesty, you would not need to worry about anything. And God is always there to guide us.

Would you support any of your daughters to follow your footstep and be an actress?

Excellently! Acting is a worthy profession, and as long as you know your onions, you have nothing to worry about.

Has fame denied you of anything in life?

How have you been able to manage life as a civil servant and actress?

I go to work very early to do my job and get back early to be on movie set. Being an actress has given me a lot of opportunities and has helped me in my job as well, because people tend to trust you more with information as an actress.

What is the craziest thing a fan has done to you?

Despite knowing that I’m married, some fans still tell me ‘I love you and I want to marry you’.

You mean you still get toasters even as a married woman?

Have you had any experience as regards sex for role?

What is the next project for you?

Producing my own movie is not the main thing as it is a regular thing. My main aim is to act in Hollywood.

Are you in any way threatened by the new faces in Nollywood?

No way. You know Nollywood is like heaven where you have so many stars; none is struggling to be in the other’s spaces, because all of them have their own position and nobody is being threatened by the other.

How did you meet your husband?

I met my husband while I was in the university; my lecturer introduced me to my husband.

Was it love at first sight?

Hmm, we dated for sometime before we got married.

What attracted you to him?

He is a very quiet man.