This is a letter (originally written in Hausa as seen below) from Mohammed Bello Turji Kachalla, the one we all know about. 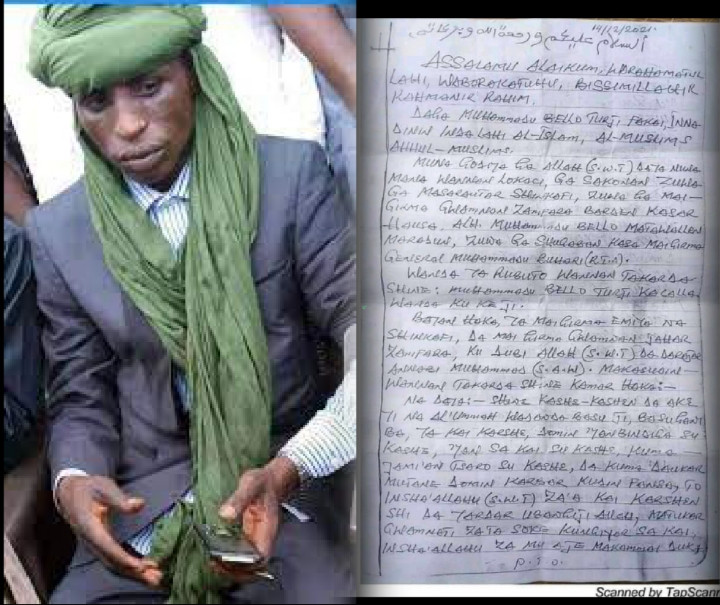 Bello Turji
The leader of a gang of bandits, Bello Turji has written a letter addressing the Zamfara Governor and President Muhammadu Buhari.
In the letter, Turji asked for dialogue to solve the banditry in the region.
He sent the letter to President Muhammadu Buhari; Zamfara State Governor, Bello Matawalle and the Emir of Shinkafi.
Turji, in the letter, said he and his man would like to have a meeting with traditional and religious leaders in Nigeria, adding that controversial Islamic cleric, Sheikh Ahmad Gumi, should also be part of the meeting.
He described Gumi as the one who understands bandits.
The letter, as published by Daily Trust, reads:
"We are grateful to God who has given us this opportunity to bring this message to the Emir of Shinkafi, through the Governor of Zamfara state, Alh Mohammed Bello Matawalle (Baraden Maradun) and to the President Mohammed Buhari.
"This is a letter (originally written in Hausa as seen below) from Mohammed Bello Turji Kachalla, the one we all know about.
"Having said that, I want the Emir of Shinkafi, the governor of Zamfara and the president, to look up to Allah and his Prophet.
"The purpose of this letter is as follows:
1. The killings of people going on which is not being publicised, the killings by bandits, herdsmen, kidnapping for ransom and even by security agents are our making. All these will come to an end by the grace of Allah. The government will have to play its part to ensure that this is achieved. As long as ethnicity and tribalism are eliminated, we need to all remain as one big family and forgive one another as Allah commands.
"2. Your highness, we would like to have a sit down with the traditional rulers in this country and also the religious leaders. If this is done, I Mohammed Bello Turji Kachalla, will make sure to disarm all my men and hand over all our arms to the government of Nigeria. As long as the government promises to take care of us the way it is taking care of the rest of the country and stop the stigmatisation of my people.
"3. Your highness, I want to assure you that we are not in contention with the government of Nigeria and we do not want any other country apart from this, we are not seeking power of any kind, rather the ugly things we Fulanis are facing in this country have pushed us to react the way we do and made us want to defend ourselves to the detriment of the peace of the nation.
"4. Your highness, we are not thieves and we don’t mean to harm anyone. This letter is not borne out of deception and we would not want to be deceived. Everything should be done in transparency for Allah’s sake and for the sake of the peace of our nation. So we can go back to the way we were in the past. We should all be law-abiding and allow the security agents to do their job and punish anyone found wanting. No form of arms would be seen with anyone except in the hands of the security agents as it’s supposed to be.
"5. Your highness, this is our last request. Just as we said earlier, we will like to make sure that all traditional rulers and all our Muslim leaders, most especially Sheikh Ahmad Abubakar Gumi, to be present at this meeting. This is because he is the only one who understands us and he has been paying us visits to sympathize with us. He has been preaching to us and we have seen the effectiveness of his messages in our lives. We only want the peaceful existence of everyone in this country.
"May Allah give us all the strength to keep these promises without fail.
"This letter is from Mohammed Bello Turji Kachalla."
Top Stories